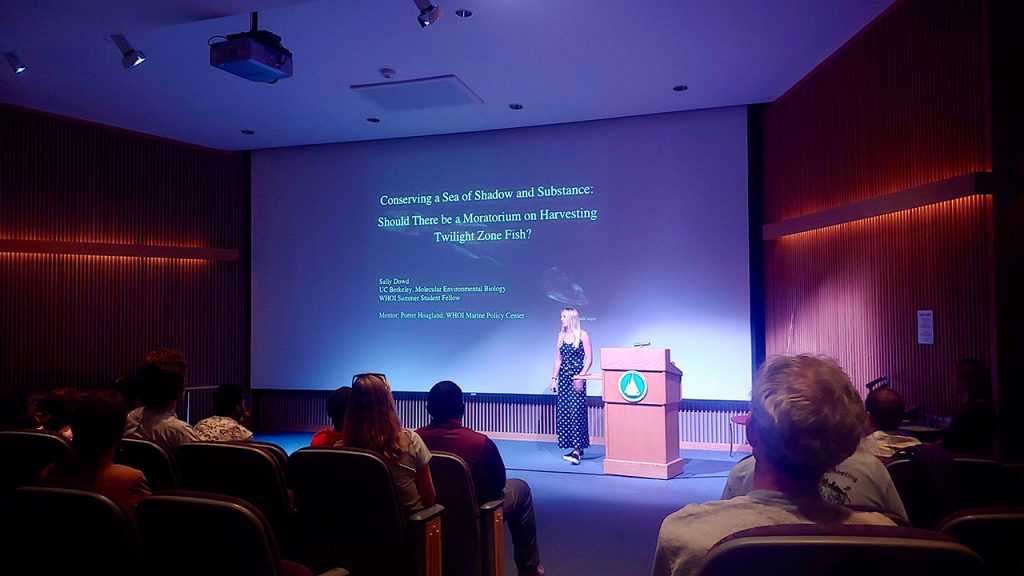 Sally Carson Dowd presenting the results of her summer project on the Twilight Zone.

Growing up near the coast of North Carolina, I gained immense respect for the marine animals I was able to observe—the ones residing in surface waters. Over time, this interest led me to gain experience with sharks and coral reef ecology. After focusing on marine biology and ecology research, this summer was the first time I was able to explore marine policy as a Summer Student Fellow at WHOI. My project this summer allowed me to combine my interests in ecology and fisheries to learn more about this ambiguous zone 200 to 1,000 meters below the surface of the ocean.

Even though much of the mesopelagic zone is unexplored, several countries and companies are already looking for ways to harvest mid-water fish, primarily to supply aquaculture operations with fishmeal. Others have exploited the mesopelagic zone in the past with little long-term success because of the cost of fishing in such an inaccessible part of the ocean. We are also learning that organisms living there may be able to avoid trawl gear.

While regulation of fishing in the mesopelagic is sparse, the Pacific Fisheries Management Council recently established a moratorium on the harvest of certain mesopelagic fish families in the exclusive economic zone (EEZ) off of the U.S. West Coast. This policy led my mentor, Porter Hoagland, and I to focus the project on the question of whether this moratorium could be justified from an economic perspective.

We used an economic model that calculated the commercial and non-commercial value of predators of mesopelagic fish such as sharks, seabirds, and rockfish off the coast of California, Oregon, and Washington. This model not only considered such parameters as the price of commercially valuable species, but also biological parameters such as predator biomass that came from an existing food-web model for the California Current.

The goal of the project was to determine whether a moratorium on fishing the mesopelagic would be justified by comparing the potential value of a mesopelagic fishery with the value that would be lost as stocks of commercially valuable predators decline due to declines of their prey. We found that once the commercial and non-commercial value of the predators were considered, a moratorium is justified, but that an important next step would be to reduce the uncertainty surrounding the input parameters.

Coming into this fellowship, I had little experience in marine policy and the mesopelagic zone. I thoroughly enjoyed my experience this summer and I am thankful for the WHOI SSF program, the Marine Policy Center and its personnel, and the OTZ project at WHOI. Spending my summer on this project allowed me to personally see the lack of information available on the mesopelagic zone. As mesopelagic fish are a largely untapped resource and the implications of harvesting them are unknown, I am excited to keep up with WHOI’s key findings with the OTZ project.