Value Beyond View: Illuminating the human benefits of the ocean twilight zone 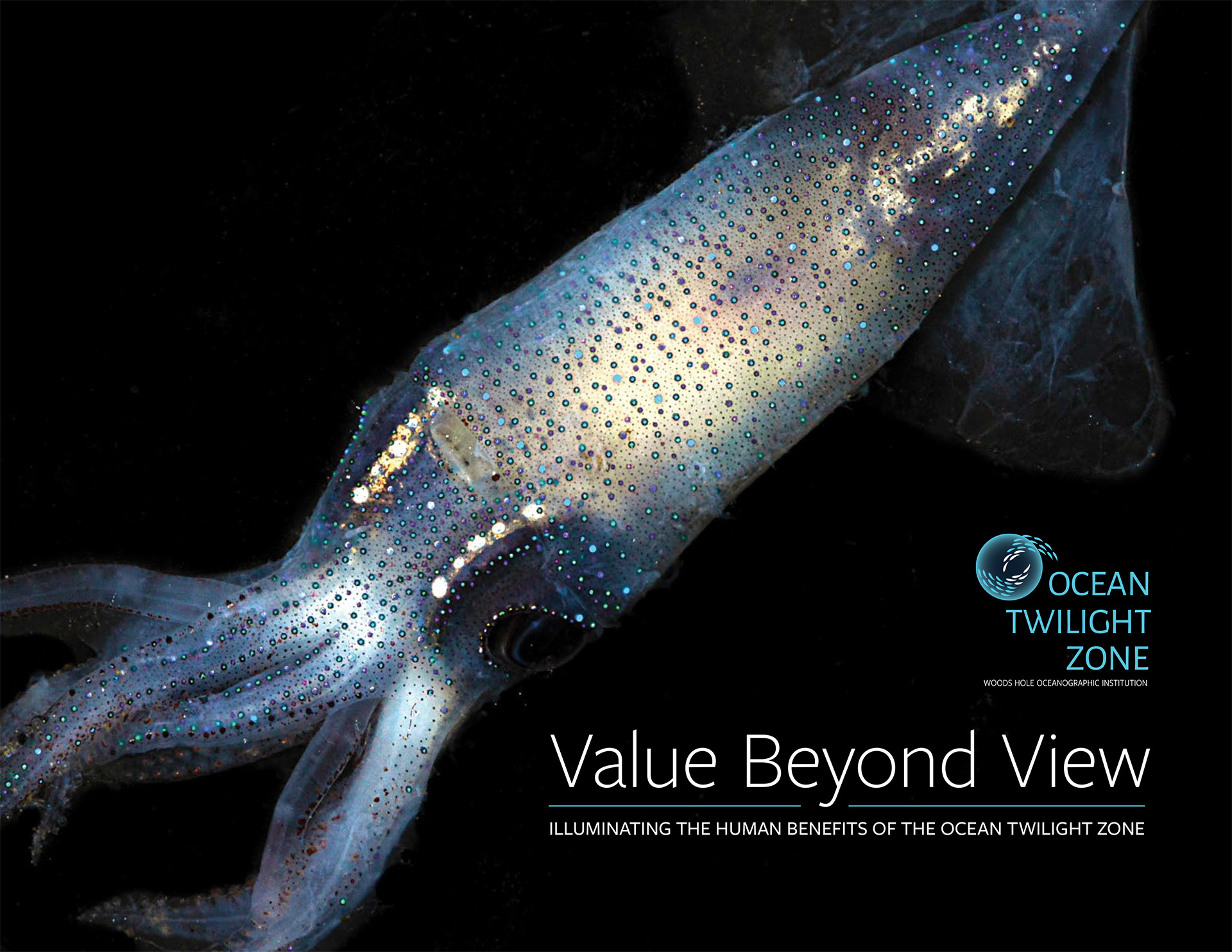 What is the value of the ocean twilight zone?

What is the ocean twilight zone?

The ocean twilight zone, also known as the mesopelagic, lies beneath the sunlit surface waters, a depth that changes with the clarity of the water, but is generally considered to be about 200 to 1,000 meters (650 to 3,300 feet) below the surface. It stretches around the world from the Arctic to the Antarctic and exists mainly in the “high seas” beyond the control of any one nation.

What are ecosystem services?

Ecosystem services are the benefits humans get from nature, either directly or indirectly. They provide a way to estimate the monetary value of natural ecosystems by assessing demand for the service or by calculating how much it would cost society to duplicate the service or respond to its disappearance.

What does the twilight zone do for us?

How does the twilight zone support a healthy ocean?

Many animals in the twilight zone live in the depths during daylight hours and migrate to the surface at night to feed. This moveable feast supports many species that live only at the surface. Some animals—like blue sharks, sperm whales, and swordfish— are able to dive deep into the ocean and feed in the twilight zone at any time. In addition, human appreciation of animals like whales, sharks, and seabirds, and for a healthy ocean inspires greater environmental stewardship.

How does the twilight zone help remove carbon?

During their daily migration, the creatures of the twilight zone move heat-trapping carbon from surface waters to the deep ocean, where it is stored indefinitely. The amount of this sequestered carbon is estimated to be between 2 and 6 billion metric tons (2.2 to 6.6 billion tons) annually. This is equivalent to 2 to 6 times the amount of carbon emitted by all the cars in the world each year.

What does this amount of carbon storage mean for Earth’s climate?

How much is this carbon storage worth?

There are several ways to calculate this. The first is by using the “social cost of carbon” (SCC), also known as the “carbon price,” which is an estimate of the present and future damages associated with the release of carbon dioxide from the burning of fossil fuels, such as flooding or coastal erosion from sea-level rise, crop losses due to drought, or human illnesses from heat waves or disease. Using estimates of the SCC, the value of the twilight zone’s role in removing that amount of carbon is worth $300 to 900 billion to society annually. The value of carbon sequestration in the North Atlantic alone is worth $200 billion to $3.4 trillion over the next 80 years in terms of the cost of preventing that much carbon from entering the atmosphere and the cost of adapting to the changes that would result from those emissions.

What is the value of learning about the twilight zone?

Gaining knowledge about the twilight zone provides value by reducing the uncertainty surrounding climate change. Reducing uncertainty limits the range of potential future outcomes that government agencies, businesses, non-governmental organizations, and individuals have to prepare for. This value is on the order of hundreds of billions of dollars.

How does the twilight zone provide food for humans?

Humans are unlikely to eat anything caught from the twilight zone—the animals there are mostly small, bony fish and gelatinous organisms. However, some governments and corporations are planning to fish the twilight zone to provide fish meal for aquaculture operations to produce  seafood for humans. Worldwide, aquaculture is expected to grow 37%by 2030 to help meet the protein demand of a growing human population and reduce pressure on fisheries that are increasingly over-fished.