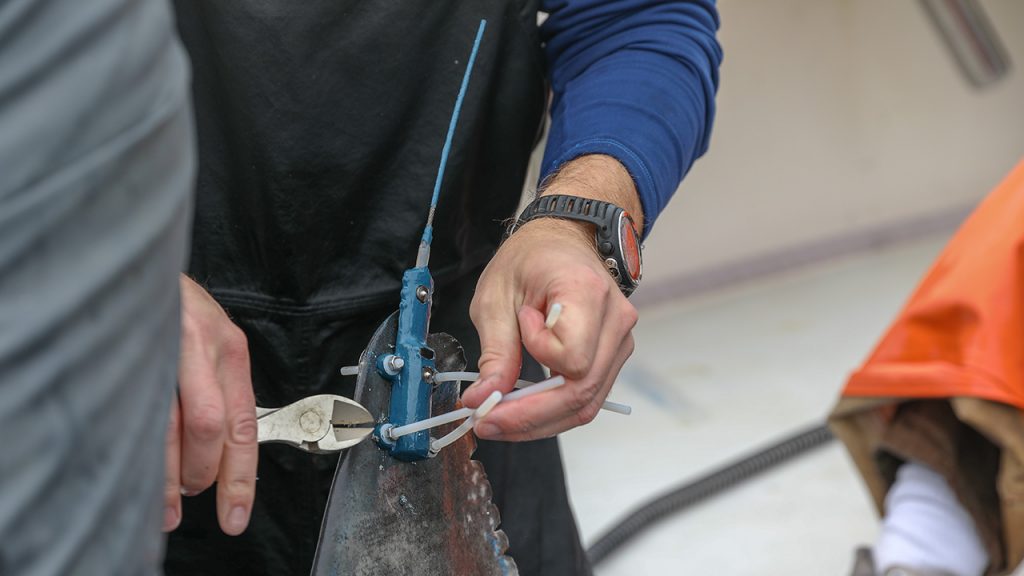 Before the rest of the Ocean Twilight Zone team heads out next week on the Neil Armstrong, there was tagging to be done of other potential food chain investigators— the kind that are blue-grey (not yellow), that swim autonomously (no batteries or propellers), with sharp teeth and a good sense for where the food may be found— sharks.

As part of his research to understand the influence of physical features of water on fish behavior, former WHOI Joint Program graduate student and current University of Washington postdoc Camrin Braun set out to find and tag mako sharks. Unlike blue sharks, which Braun and his former advisor, WHOI biologist Simon Thorrold, tagged and tracked into warm-core eddies, makos do not have the ability to control their body temperature. As a result, mako sharks are beginning to head south this time of year as the North Atlantic cools.

For the Ocean Twilight Zone team, the big predators are an important indicator of where mesopelagic animals are collecting deep below the surface. In short, the predator will go where the prey is.

In a study published earlier in the year, Braun and Thorrold found that blue sharks use warm Gulf Stream eddies—swirling masses of water that have “pinched off” from the main stream of the current—to dive deep and feed in the ocean twilight zone. Braun and Thorrold wanted to see if makos mirrored that behavior. 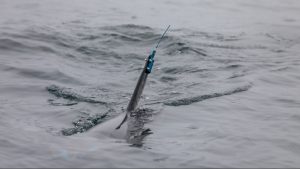 Unfortunately, the makos didn’t cooperate, but Braun and his team on the charter fishing vessel Machaca managed to tag two porbeagles, a relative of the goblin shark, about 30 miles east of Chatham, Mass. One was a female nearly seven feet long and weighing 270 pounds. A male came alongside the boat while the team was tagging her and, when they were finished, they quickly hooked the curious male, which measured 6.5 feet and weighed 230 pounds.

Both fish are now equipped with fin-mounted SPOT satellite tags, which will report their location each time they surface and can last up to five years. Like blue sharks, porbeagles have some ability to thermoregulate, so the data will present an interesting comparison in the way both species may use the twilight zone to hunt.

With any luck, data from tags on one of the sharks will tell the OTZ team on R/V Neil Armstrong, which leaves port on Sunday, where they’ll find a “hot spot” of biological activity in the deep, dark, cold twilight zone.