The Intergovernmental Conference (IGC) on an international legally binding instrument (ILBI) under the UN Convention on the Law of the Sea (UNCLOS) on the conservation and sustainable use of marine biodiversity of areas beyond national jurisdiction (ABNJ): The name doesn’t exactly roll off the tongue. It is, however, quite possibly the best chance for the twilight zone—a vast swath of ocean 200-1,000 meters below the surface—to receive international recognition and management. For that reason, WHOI marine policy expert and Ocean Twilight Zone team member Porter Hoagland recently made two trips to the UN to observe the IGC deliberations.

In international law, the high seas—anything in the ocean beyond the 200 nautical mile exclusive economic zones or the continental shelves—is open to use by any individual, organization, or country. After decades of piecemeal regulation, nations began the process of negotiating the terms of the UNCLOS in the 1950s. It was envisioned to be a legally binding treaty that would codify regulation of the world ocean and make all nations subject to the same rules.

“The high seas are treated differently in international law than are areas near coastal nations,” said Hoagland. “For the most part, firms and nations are able to do what they want in the open ocean with little oversight. There have been many attempts at regulating high seas fishing, with some fisheries management successes, but a general conclusion is that high seas management has been largely ineffective.”

The current law of the sea also attempts to distribute economic gains derived from the high seas more equally, particularly the profits from seafloor mining, an activity that exceeds the technological capacities of many of the world’s less-developed nations. Under Article 82, companies would be charged royalties on revenues generated from high-seas energy and mineral development, and these would be distributed in part to less-developed nations.

After decades of hype, however, a hoped-for windfall of revenue from minerals such as seafloor manganese nodules and massive sulfide deposits near hydrothermal vents has yet to appear. Now, attention has turned to the ocean’s vast biological resources, particularly genetic resources that might be used to make marketable products. Yet the problem of unequal capacity among nations remains. That’s where the conference with the 37-word name, sometimes abbreviated as BBNJ for “biodiversity beyond national jurisdictions,” comes in.

“The concern is that the technologies for understanding genetic resources and utilizing their economic potentials are rapidly developing and that poorer countries will lose out,” said Hoagland. “There’s a desire on the part of some nations to establish a structure analogous to the one for seabed mining to regulate marine genetic resources. No one knows the economic potential of those resources, however.”

In particular, Hoagland pointed to concerns over activities by companies such as the German chemical company BASF, the largest chemical producer in the world. Researchers at BASF and elsewhere have begun combing through scientific literature for reports of new genetic sequences from marine organisms and patenting them. 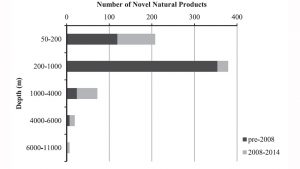 The number of novel natural products from different depths in the ocean shows the relative importance of the ocean twilight zone. Scientific research on marine genetic resources (MGRs) is small, but growing and is one major motivation for BBNJ deliberations at the UN. (Harden-Davies, 2017)

The delegates to the BBNJ conference primarily focused their negotiations on these and other issues as they related to surface waters and the seafloor. Recent research has shown the distribution with depth of the number of novel natural products derived from marine organisms (left). Before 2008, the number of natural products derived from organisms located in the twilight zone was more than double that of any other part of the ocean, although these were located predominantly in national exclusive economic zones. Since 2008, the number of products from surface waters has risen sharply, but the twilight zone remains the greatest source of natural ocean products—more than in all other parts of the ocean combined.

At the same time, interest in seabed mining has not gone away, nor have the problems associated with it. One in particular could impact the twilight zone: what to do with all the extra materials, known in mining terminology as “tailings,” that are brought to the surface along with the mineral ore. Like other discussions at the BBNJ conference, some proposals have focused more on protecting surface fisheries at the expense of deeper down by calling for those tailings to be dumped under the surface waters directly into the lower reaches of the twilight zone.

“An argument can be made that much of the meeting has been devoted to issues concerning the management of resources and uses in the surface waters and on the seabed,” said Hoagland. “Very little attention has been paid to that third dimension, the twilight zone.”