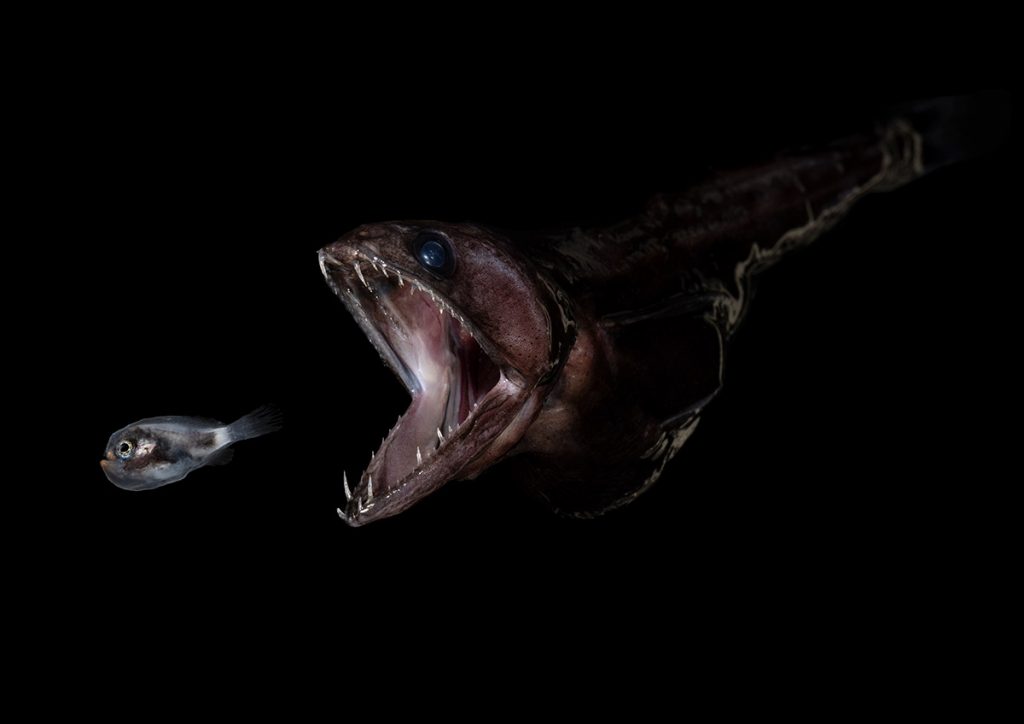 A tiny larval hatchetfish (left) is about to become lunch for a black swallower (Chiasmodon niger).

About the Black swallower

If you’ve ever witnessed a hot-dog eating contest, you know that winning contestants are often surprisingly skinny. They open their mouths wide, barely chew the food, and choke it down as quickly as possible before their stomachs feel the pain. In the ocean twilight zone, the ability to swallow more than you can chew is a matter of survival. But the black swallower takes the cake—or rather, the fish. Thanks to a balloon-like stomach, large mouth and long lower jaw, it can swallow other fish whole—up to twice its length and ten times its weight—similar to how snakes swallow a whole deer. Hooked, backwards-pointing teeth retract to make room for prey—and interlock to keep it inside.

Black swallowers have rarely been seen in their natural habitat at 700-3,000 meters (3,000-10,000 feet) depth. But dead specimens have been found floating at the ocean surface with what looks like a semi-transparent spare tire hanging from their bellies, filled with barely digested larger fish. When your eyes are bigger than your stomach, it’s a race between digestion and gases from decomposing fish accumulating in your stomach—and sometimes the black swallower loses.

While its eating habits sometimes lead to a one-way ticket to the ocean surface, the black swallower spends the majority of its time in the twilight zone—or the even deeper bathypelagic zone. With its dark, scaleless body, the fish is a stealthy hunter. The “eat first, ask questions later” strategy is clearly working out for this species: black swallowers are very abundant in the temperate and tropical Atlantic and Gulf of Mexico.