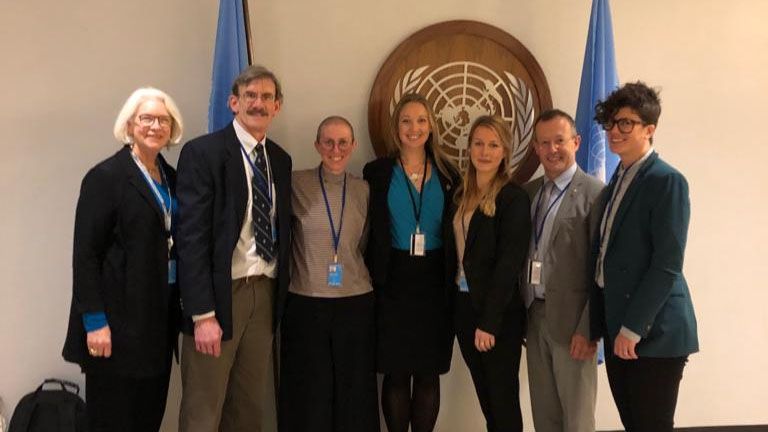 Policy activities by members of the OTZ team have fallen into two categories: research and reporting, and leadership and influence. Both have established the policy group as a cross-theme within the project that draws on research findings and, at the same time, helps feed the science and technology themes with key unanswered questions at the heart of new or pending policy discussions.

New research and reports by the policy team have focused primarily on educating and informing policy-makers on the economic value of the twilight zone, both as a functional part of the broader ocean ecosystem and as a critical part of Earth’s climate system. The OTZ report on twilight zone ecosystem services, an upcoming book chapter on natural capital in the mesopelagic, and a review of changes in marine capture fisheries for the Second World Ocean Assessment are prime examples of this work and its ability to reach targeted audiences.

On the leadership and influence front, team members from the policy and science themes have established and deepened relationships with representatives of governmental agencies, intergovernmental organizations, civil society, and academia to raise the profile of the mesopelagic region at key meetings and negotiations. The two efforts that the team has identified as offering the richest opportunity for far-reaching science-based decision making are the ongoing negotiations for the new treaty governing Biodiversity Beyond National Jurisdiction (BBNJ) and the upcoming UN Decade of Ocean Science for Sustainable Development.

What are the potential economic effects if commercial fishing in the twilight zone affects other marine species?

At the moment, the economic value of twilight zone fisheries does not appear to support industrial-scale fishing, but this may change as technological developments and the demand for fishmeal and fish oil to supply aquaculture operations tip the scale towards profitability. Many large-scale fisheries have already forced alterations in the structure and function of their associated ecosystems as a result of overfishing and other human-caused environmental changes. Exactly how these ecosystem changes translate into economic impacts remain unknown, but developing nations that rely on fisheries for food security and export are likely to feel the effects of any changes more severely than those with more diversified economies. At the same time, recent research has shown that science-based management can lead to faster recovery of fisheries and more sustainable use of resources.

What are the potential economic effects if commercial fishing in the twlight zone affects the ocean's ability to naturally sequester carbon?

What are the key opportunities to have the ocean twilight zone recognized as an integral part of the global marine ecosystem?


There are several critical international activities occurring now that present significant opportunities for the OTZ team to raise the visibility of the twilight zone on a global stage and to conserve its resources as a critical part of the marine ecosystem and global climate system, while also ensuring its long-term viability as a source of food for humans. Negotiations for a treaty to govern the conservation and sustainable use of marine biological diversity of areas beyond national jurisdiction have been occurring for more than a year, with OTZ team members taking part as observers with partners from the Deep Ocean Stewardship Initiative (DOSI). In addition, OTZ team members have been actively involved in the planning meetings for the upcoming UN Decade of Ocean Science for Sustainable Development as well as working with the Intergovernmental Oceanographic Commission of UNESCO to have the OTZ project recognized as an official Decade Activity and to ensure participation of WHOI in other ways.