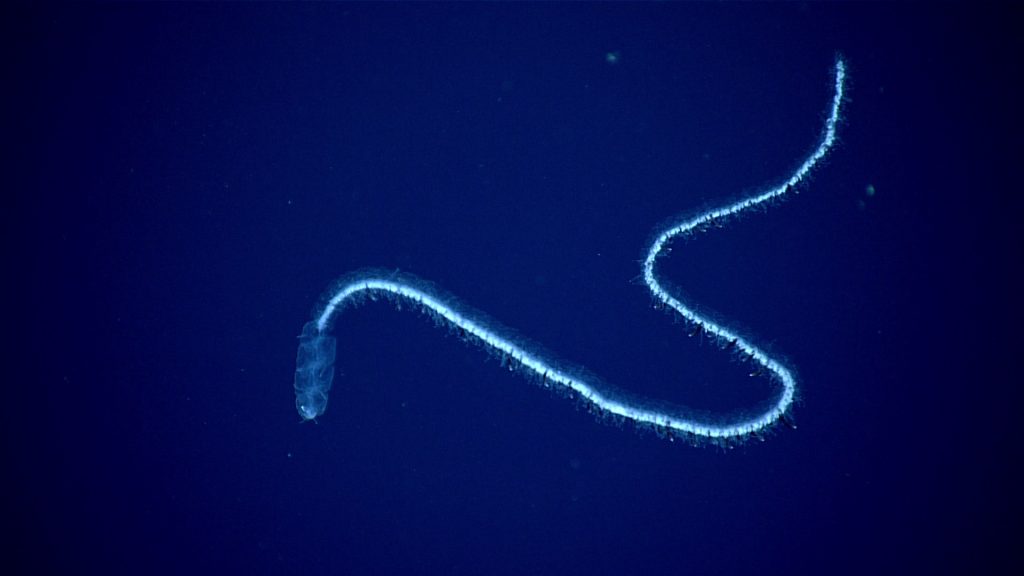 Siphonophore observed during the midwater portion of a dive by the NOAA Office of Exploration and Research off the coast of Puerto Rico in 2017. (Image courtesy of NOAA OER)

On May 6, WHOI announced it would be joining a $94 million consortium led by the University of Rhode Island Graduate School of Oceanography to support ocean exploration, responsible resource management, improved scientific understanding of the deep sea and strengthen the nation’s Blue Economy.

The goal of the new Ocean Exploration Cooperative Institute, which includes five internationally renowned ocean science institutions, is to spend the next five years working closely with NOAA’s Office of Ocean Exploration and Research (OER) to survey an estimated 3 billion acres of U.S. ocean territory.

That might immediately bring to mind a concerted effort to treat the ocean as a submerged landmass by simply mapping the seafloor, but the proposal that was submitted to NOAA outlining the activities of the new institute is an acknowledgement of the need to survey the entire ocean within U.S. territorial waters, including the little-explored twilight zone.

“The goal of the OECI is to build upon NOAA OER’s present “exploratory engine” using its two ships of exploration, NOAA Ship Okeanos Explorer and exploration vessel (E/V) Nautilus, as a starting point,” the proposal authors wrote. “We propose to expand their ability to explore the benthic environment as well as the mid-water or “Twilight Zone” where 95% of all living creatures are found.”

This is especially important because the U.S. has the second largest exclusive economic zone (EEZ) in the world, with territorial waters in the Northeast Atlantic and North, Central, and Equatorial Pacific. Extending mid-water studies across such a broad swath of the global ocean would open a significant volume of the twilight zone to exploration and help advance understanding of this under-studied part of the planet.