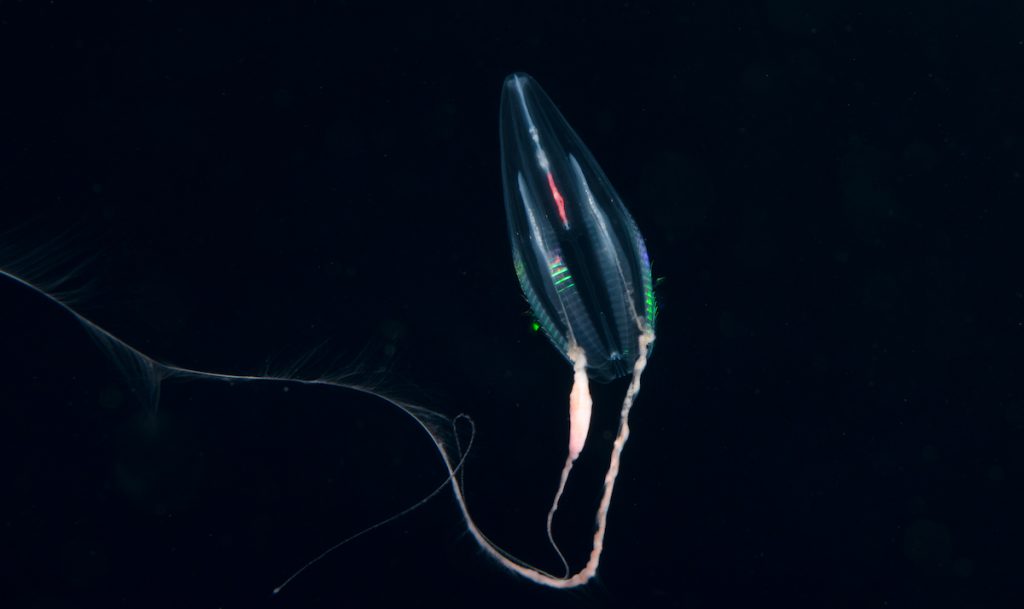 A comb jelly, one of the many species that live in the ocean twilight zone, appears rainbow-colored—but this prism effect is actually the product of light refraction rather than bioluminescence. Photo by Paul Caiger, Woods Hole Oceanographic Institution.

The ocean twilight zone plays an outsized role in global climate: It helps to transport carbon from the upper ocean into deeper waters, where it is removed from the atmosphere for hundreds to thousands of years.

In the process, the zone can act as a buffer to climate change, slowing the effects of human carbon emissions. Without the benefits that it provides, CO2 levels in the atmosphere would jump by nearly 50 percent, amplifying the speed and severity of climate change. Yet how could the twilight zone simply stop working?

A new report from the OTZ team is offering a detailed look at the climate-altering processes that take place within the zone, especially ones that are driven by animals that migrate between the twilight zone and the surface each night to feed. This phenomenon is likely the biggest migration on Earth—yet it remains incredibly vulnerable to human exploitation.

The release of this report is especially timely. Right now, world leaders and policymakers have convened on the rocky coast of northwest France for the long-awaited One Ocean Summit. It’s an all-encompassing event that aims to mobilize the international community around ocean-related issues—and climate change will be one of the primary topics covered, along with marine plastic pollution and fisheries policy.

Dr. Kilaparti Ramakrishna (Rama), WHOI’s Senior Advisor on Ocean and Climate, is participating in the One Ocean Summit taking place now through Friday, Feb. 11 in Brest, France. He will meet the key global leaders and policy makers, and continue to raise awareness of twilight zone research, and will share the OTZ report widely with key players in the global community.

Want to get involved yourself? Click below to download our report and virtually attend the One Ocean Summit while it’s underway!

Dr. Kilaparti Ramakrishna (Rama) is WHOI's new senior advisor to the President and Director on ocean and climate policy.
DOWNLOAD THE REPORT