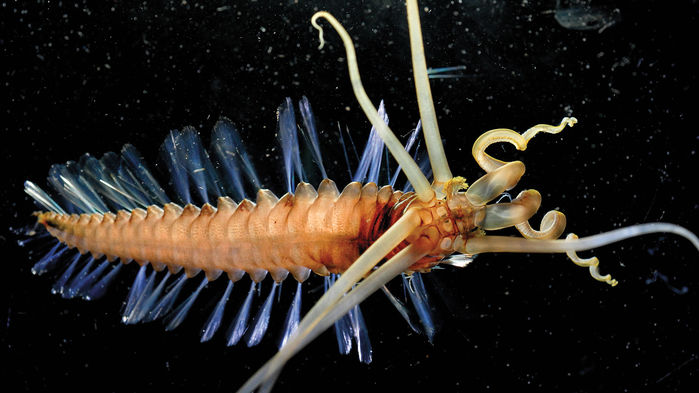 The Ocean Twilight Zone is home to some bizarre and beautiful life, like this showy bristle worm. Most of the species living in the zone, however, have yet to be discovered.

To sustainably manage fisheries in the ocean twilight zone, it's critical to understand how much overall life (or “biomass”) the zone holds, and what types of animals exist there (“biodiversity”). That’s no easy task. To date, researchers have been challenged by the fact that the twilight zone is vast, dark, and hard to access. In 2020, however, our scientists have gained tantalizing insights that bring us closer to an answer.

How much life is in the ocean twilight zone? 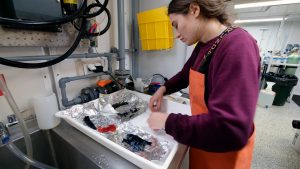 Current estimates of fish biomass are highly uncertain due to assumptions about what the acoustic signatures of fish look like from the surface. The OTZ team’s new vehicle, Deep-See, is uniquely capable of reducing this uncertainty. It places sophisticated acoustic systems directly into the twilight zone, creating precise measurements that let researchers develop more accurate estimates of biomass. This is particularly important today, since other recent estimates have suggested that fish biomass in the twilight zone may be more than 10 times greater than previously thought and have spurred the interest of the commercial fishing industry. Data gathered by Deep-See, however, indicates that this number is likely too high. The real number may be closer to two or three times more fish than historical estimates. The analysis also shows that the distribution of fish in the twilight zone is more variable than previously believed.

In addition to broadband acoustic instruments, Deep-See is equipped with a holographic camera designed to capture extremely high-resolution images of zooplankton less than one inch in size. Once analyzed, these

images will add detail to the acoustic data and give the OTZ team the ability to characterize zooplankton in deep scattering layers. We need to know the relative abundance of common types of mesopelagic zooplankton so we can estimate their total biomass and better understand the role they play in marine ecosystem dynamics and global carbon cycling.

The holographic camera aboard Deep See can also image soft-bodied creatures like jellyfish, salps, and siphonophores—creatures that have been historically undercounted in both acoustic surveys and net tows. In addition, a camera aboard the towed system ISIIS is specially equipped to study these soft-bodied creatures, and the two platforms have each generated hundreds of hours of new footage.

All told, the team has completed over 200 hours of Deep-See tows, 25 trawl nets for fish, and 20 net tows for plankton throughout the twilight zone. These efforts have collected animal samples and data from the surface down to 1,000 meters at all times of day, capturing animals at multiple points during their migration through the water. In the process, the team is generating a more complete understanding of life across the entirety of the twilight zone and revealing how it changes over time.

What kinds of animals live in the ocean twilight zone?

Species that live in the ocean twilight zone are remarkably understudied. As a result, genetic reference libraries don’t exist for many of these creatures. The OTZ team is currently working to fill the gaps in genetic libraries, helping to both facilitate its own research and accelerate twilight zone research across the globe. To that end, team members have genetically analyzed over 200 individuals, adding DNA from 67 unique species to the library to date.

This ef fort has also revealed a probable new cryptic species—one that appears very similar or identical to existing species, but differs at the genetic level—in specimens of the lanternfish Centrobranchus nigroocellatus. The OTZ team found consistent genetic differences in samples originating in the Sargasso and Caribbean Seas and those from the Gulf of Mexico. Based on these differences, it is likely that there are actually at least two distinct and geographically separated species. Identifying cryptic species is important in order to obtain accurate estimates of biodiversity. We expect that as our database grows, we will find more examples of cryptic species. 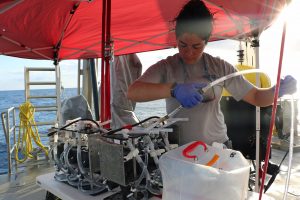 Because net tows aren’t capable of capturing everything, the team is pioneering a new genetic approach that uses environmental DNA (eDNA) to identify animals in the twilight zone that nets may have missed. The technique uses filtered seawater samples to reveal traces of DNA left by animals in the water, letting researchers identify animals without ever laying eyes on them. The OTZ team has collected more than 500 eDNA samples to date. While there is significant overlap between species identified through eDNA and net tows, each approach is recovering unique species that the other method missed.

The team has also conducted laboratory experiments to learn how different types of organisms might shed eDNA, and how long that eDNA may persist in the water. The results from these experiments have shown that gelatinous organisms shed more eDNA than fish, and organisms that have an exoskeleton, like shrimp, shed less. These findings will help create models that will let researchers better understand eDNA results from the twilight zone.