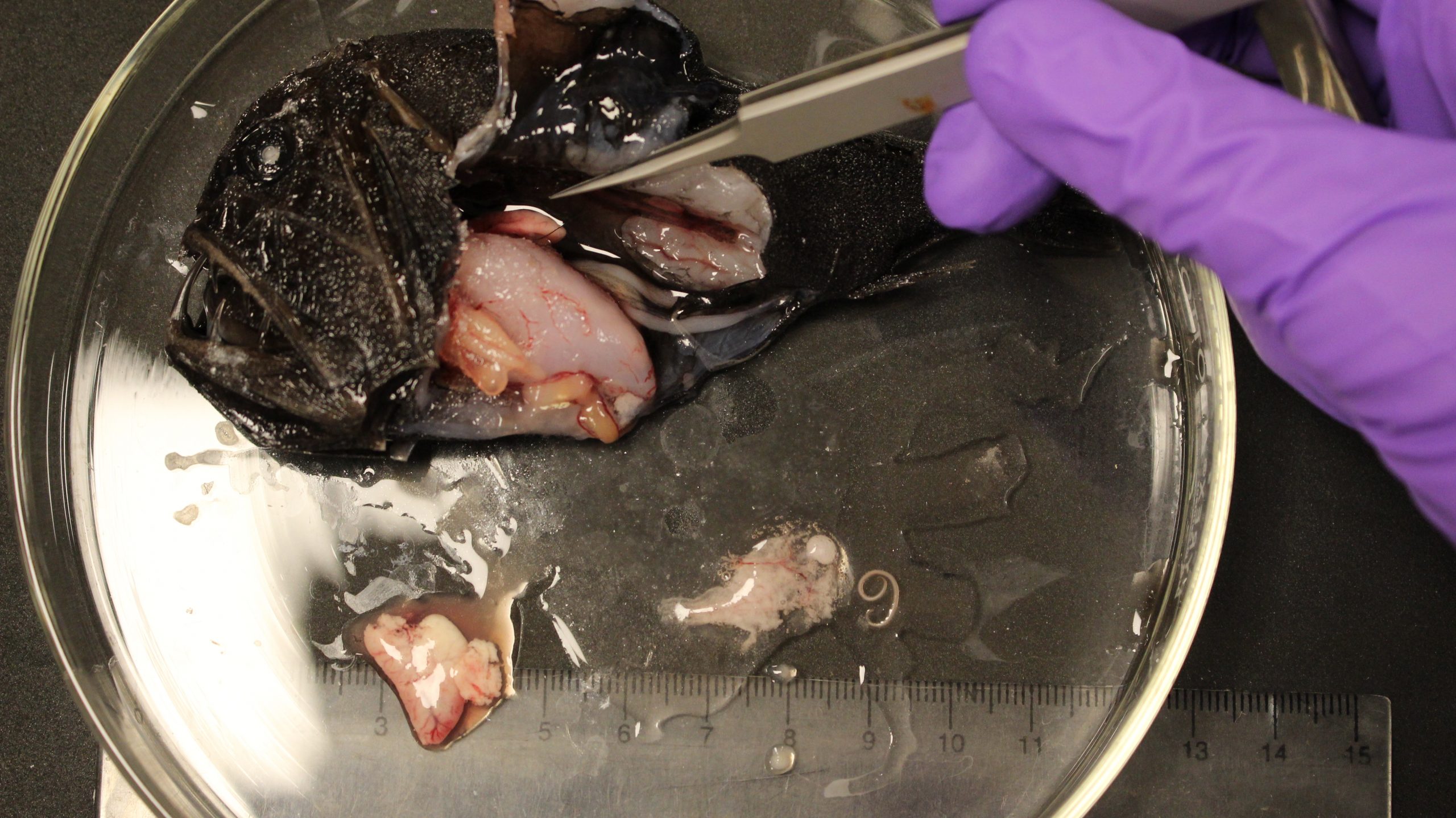 The OTZ team is studying food webs in the twilight zone using a number of different methods. One important technique is good old-fashioned dissection, which can reveal what a predator is eating. Pictured here, an OTZ team member examines the stomach contents of a freshly-caught Fangtooth.

Measuring and understanding linkages in the twilight zone food web—and between the twilight zone and other parts of the ocean—are key objectives for the OTZ team. By describing what species are present and how they interact with each other, we've begun to piece together the function and importance of the twilight zone ecosystem as a whole.

Do animals near the surface interact with animals from the OTZ? Collapse

Over the past year, OTZ researchers have discovered that animals in the twilight zone don’t just fit into a single food web. Instead, they make up at least two distinct, yet related systems: one that interacts with surface food webs and another that appears to remain at depth, largely separate from the surface.

OTZ researchers used stable isotope analysis to reveal the link between twilight zone and surface food webs. By measuring the ratio of carbon 13 and carbon 12 isotopes from amino acids in a fish’s muscle tissue, the researchers were able to determine whether the animal’s primary food source lived at the surface or at depth. Eventually, the stable isotope method may help determine which species migrate to the surface each night, and which ones do not, providing new information on the behavior and life cycles of poorly understood species.

Who is eating whom in the ocean twilight zone? Expand

The OTZ team continues to use a variety of methods to determine predator-prey relationships in the twilight zone. These include placing tracking tags on top predators, stable isotope analysis of muscle tissue, eDNA analysis, and visual and genetic analysis of gut contents.

Data from satellite tags showed for the first time that blue sharks target the twilight zone on foraging dives in the center of warm-core ocean eddies—large, swirling water masses once thought to be ocean “deserts.” This insight is critical to shaping flexible management strategies for individual species and entire ecosystems. Along with data collected through environmental DNA and the Deep- See vehicle, the OTZ team’s research suggests that gelatinous organisms are likely underestimated, and could be one of the most common life forms in the twilight zone. Together, these complementary techniques provide a new picture of the twilight zone food web.

How could commercial fishing affect the ocean twilight zone? Expand

To determine how fishing might affect the twilight zone ecosystem, we need to first understand the life histories and behaviors of the many different species living there. Knowing their growth rate, maturation, and reproductive behavior will help the OTZ team lay the groundwork to predict such future impacts. To that end, OTZ researchers have completed over 600 dissections of animals spanning the depth range of the twilight zone and have conducted analyses to better understand their lifespan, growth rate, and age at maturity—all of which are critical components to understanding a species’ resilience to fishing pressures.