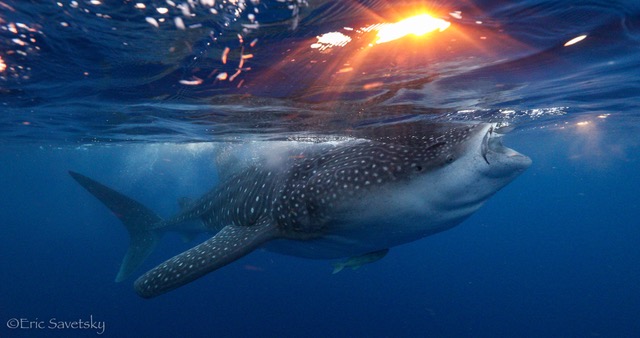 Apex predators like blue sharks spend much of their lives feeding in the ocean’s surface waters—but where do they go when they dive into deeper waters? After fitting some of these animals with satellite tags, WHOI’s OTZ team showed for the first time that the sharks also spend time hunting in the twilight zone. Data from the tags revealed that the sharks speed down the center of warm-core ocean eddies—large, swirling masses of water—to reach the abundant food that exists nearly 1,000 meters below the surface. This insight is critical to shaping flexible management strategies for individual species and entire ecosystems.

Although researchers deployed the tags on porbeagle sharks and swordfish last fall, they are still receiving valuable data from them today. The team also recently tagged five whale sharks in the northwest Atlantic, and are gathering important
information on the horizontal and vertical movements of these giant animals. We have new data from satellite tags deployed on whale sharks last year in the Azores that indicates whale sharks are also feeding in the twilight zone during ocean migrations.

The data the team generates from these tags will help us understand how each of these important predators forage in the meso pelagic, offering further detail on the function of food webs in the twilight zone.