This week, Greta Thunberg has captivated the world by sailing from the UK to New York City for next week’s UN Climate Action Summit. Her goal has been to raise awareness of climate change and the environmental costs of international travel, but her voyage has also put a lot of eyes on the sea. As she’s been sailing the Atlantic, national delegations have been gathered at the UN hard at work on a new ocean treaty. This meeting is the third in what will be a series of four talks that have the potential to reshape the future of the high seas and our use of them.

The goal of the meetings is to negotiate a treaty that regulates biodiversity beyond national jurisdiction (BBNJ). Currently, the high seas are largely unregulated, and many countries hope to change that. At the last meeting, WHOI Senior Research Specialist Porter Hoagland and I worked to push delegates to take the often ignored twilight zone into account. Once again, I was lucky to join these talks with the Deep Ocean Stewardship Initiative (DOSI) on behalf of WHOI’s Marine Policy Center. 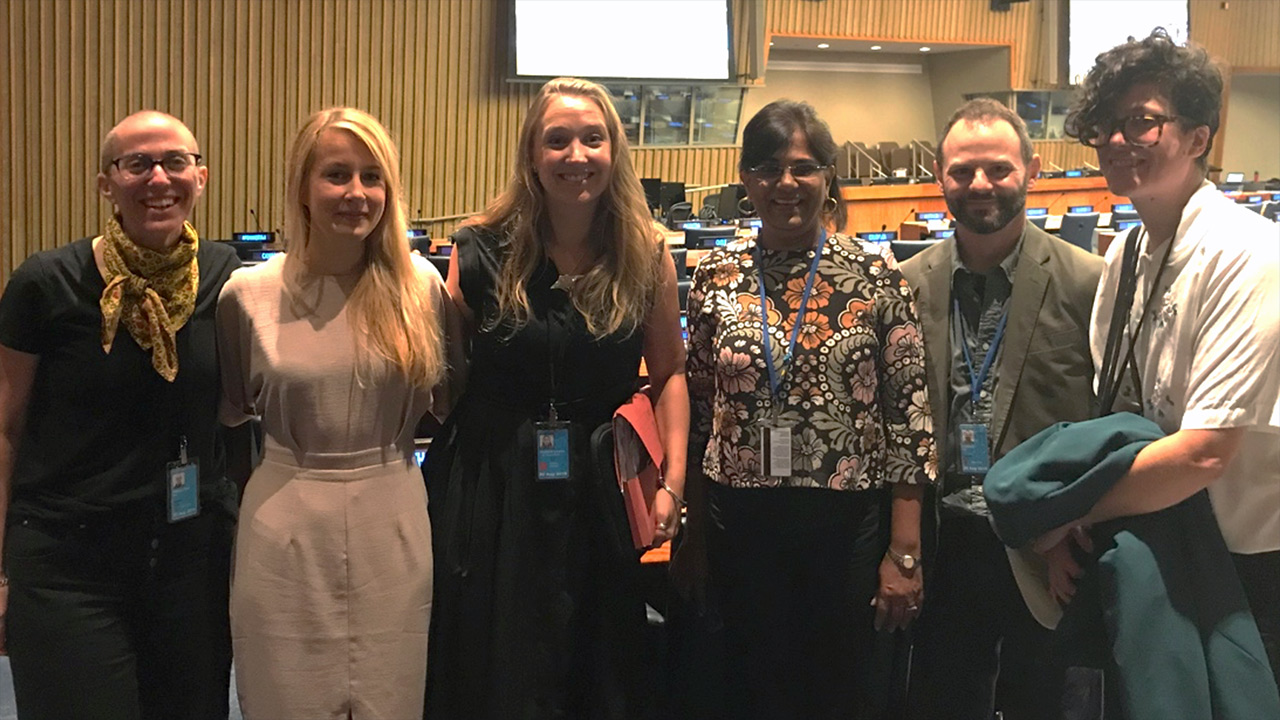 At this third session of the negotiations, the deep sea had a presence both in side events and in interventions in the general working group. For example, at a side event on the importance of incorporating biological data into BBNJ management, Jorge Jimenez of MarViva described the importance of vertical linkages in ocean ecosystems: “Imagine you’re on a beach in Costa Rica,” he said. “You might see a current coming your way. When it breaches the Costa Rica coast, it turns north and pulls water up from the depths of the ocean.” The picture he painted would be a result of upwelling, which brings nutrients up from deep waters to the surface waters. There, they nourish the phytoplankton that fix carbon. This process plays a large role in biogeochemical cycles. Because many nutrients move from coastal waters into the high seas, the scene also demonstrates the dependence of high seas ecosystem services on activities within exclusive economic zones (EEZs) and, therefore, the importance of taking transboundary impacts into account in a final treaty.

The deep sea was also an area of interest in discussions of marine genetic resources (MGRs). For instance, at an IUCN side-event some delegations raised the problem of managing MGRs in spite of the paucity of information about their presence in deep waters. In particular, there is still much to discover about eDNA, such as its rate of degradation in the deep sea. Increasing and sharing research about the twilight zone and its MGRs will be key to ensuring a responsible, equitable agreement. In informal conversations with other delegates, the DOSI team stressed the importance of explicitly referring to climate change’s effects on the oceans, including warming, deoxygenation, and acidification. Their causes and impacts overlap, and a strong agreement must consider each one—including its relationship to deep sea functions—in its own right. Overall, we were encouraged to see our conversations incorporated into interventions in the general session.

While negotiations are proceeding according to plan, there are still some major differences between states that threaten to either obstruct consensus or lead to a weak final agreement. Some important unresolved issues include the treaty’s relationship with activities that fall under national jurisdictions, to what extent the instrument will provide for financial mechanisms to support countries that need it, and whether the instrument will require or merely suggest best practices in researching, exploiting, and sharing high seas resources. We at WHOI’s Marine Policy Center look forward to continuing our participation in the BBNJ negotiations and working to make sure that the deep sea and the twilight zone remain on the agenda.

For more information on the BBNJ process, or to follow along with the negotiations in real time, visit https://www.un.org/bbnj.