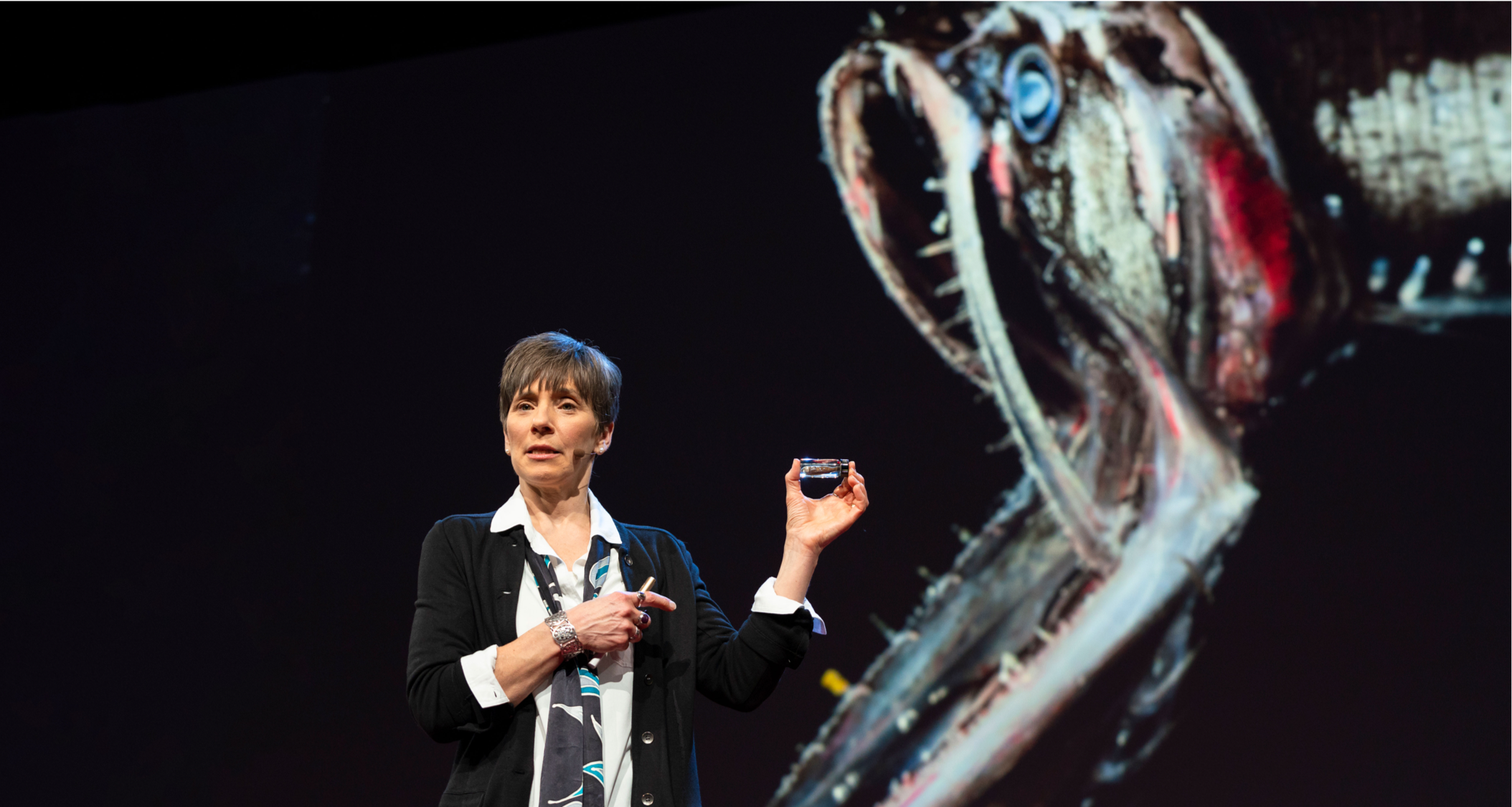 Projected on the TED stage behind WHOI oceanographer Heidi Sosik are the gaping jaws of a bristlemouth, a fish that dwells in the twilight zone. Bristlemouths may look terrifying, but a dozen of these tiny creatures could fit in the vial she holds in her left hand. Photo by Bret Hartman, TED.

Woods Hole Oceanographic Institution is embarking on a journey to explore and understand one of our planet’s last hidden frontiers—the ocean twilight zone (OTZ), a shadowy region far below the ocean’s sunlit surface. The OTZ project is WHOI’s first major research initiative supported by a new, disruptive funding model: The Audacious Project.

Housed at TED, The Audacious Project matches up philanthropic organizations and individuals with highly innovative projects designed to inspire large-scale positive change. In the spring of 2018, The Audacious Project chose the OTZ team as one of its first awardees, connecting WHOI with donors who provided a total of $35 million in support--the largest philanthropic gift in the Oceanographic’s history.

One early benefit of Audacious funding was the opportunity for OTZ project leader Heidi Sosik to deliver a TED Talk at the 2018 TED conference in Vancouver, putting WHOI ocean science on the world stage.

“It’s hard to imagine a more important pursuit of vital knowledge than a deep dive into the twilight zone,” said TED Curator and The Audacious Project lead Chris Anderson. “The ambition and potential of this WHOI initiative are equally thrilling. We are truly proud and excited to see this become one of the major initiatives catalyzed by The Audacious Project.”

Most of the seven world-changing ideas awarded Audacious funding in 2018 are led by social entrepreneurs. WHOI’s is the only one focused on ocean science.

“Through Audacious we have a coalition of funders supporting some of the world’s most bold and actionable projects,” said Anna Verghese, Executive Director of The Audacious Project. “WHOI is poised to effect wide-scale change and promote unprecedented engagement in ocean science, opening up twilight zone research expeditions, technology innovations, and scientific discoveries to the public in a whole new way.”

Bridgewater Associates founder Ray Dalio is a leading supporter of ocean exploration and media through his OceanX initiative, and he championed WHOI’s Ocean Twilight Zone initiative in the competition for The Audacious Project funding.

“After eight years of working with WHOI on a number of major ocean exploration projects, I am thrilled to dive deep into the exploration of the twilight zone together,” Dalio said. “We will explore this extraordinarily interesting area and bring this exploration to the attention of millions of people through a broad based social and traditional media effort.”

WHOI board member Tom Tierney says he saw The Audacious Project as an opportunity to get WHOI science and technological innovation some well-deserved attention from potential funders and the general public.

“In my 22-year relationship with the Institution, I’ve come to know WHOI as a powerhouse of both ocean research and engineering, a unique combination that has led to some truly amazing advances in our understanding of the ocean,” Tierney said. “Now is the time to aggressively step up our game, to communicate our impact on the world, and to make the case for boldly supporting our efforts.”

“It is remarkable that, in this area of exploration, such a massive and life-sustaining part of the ocean remains understudied,” said Hood, whose foundation is providing critical funding for WHOI’s OTZ project. “WHOI is pairing world-class oceanography with advanced technological development in its innovative bid to advance our understanding of the twilight zone’s mysteries.” 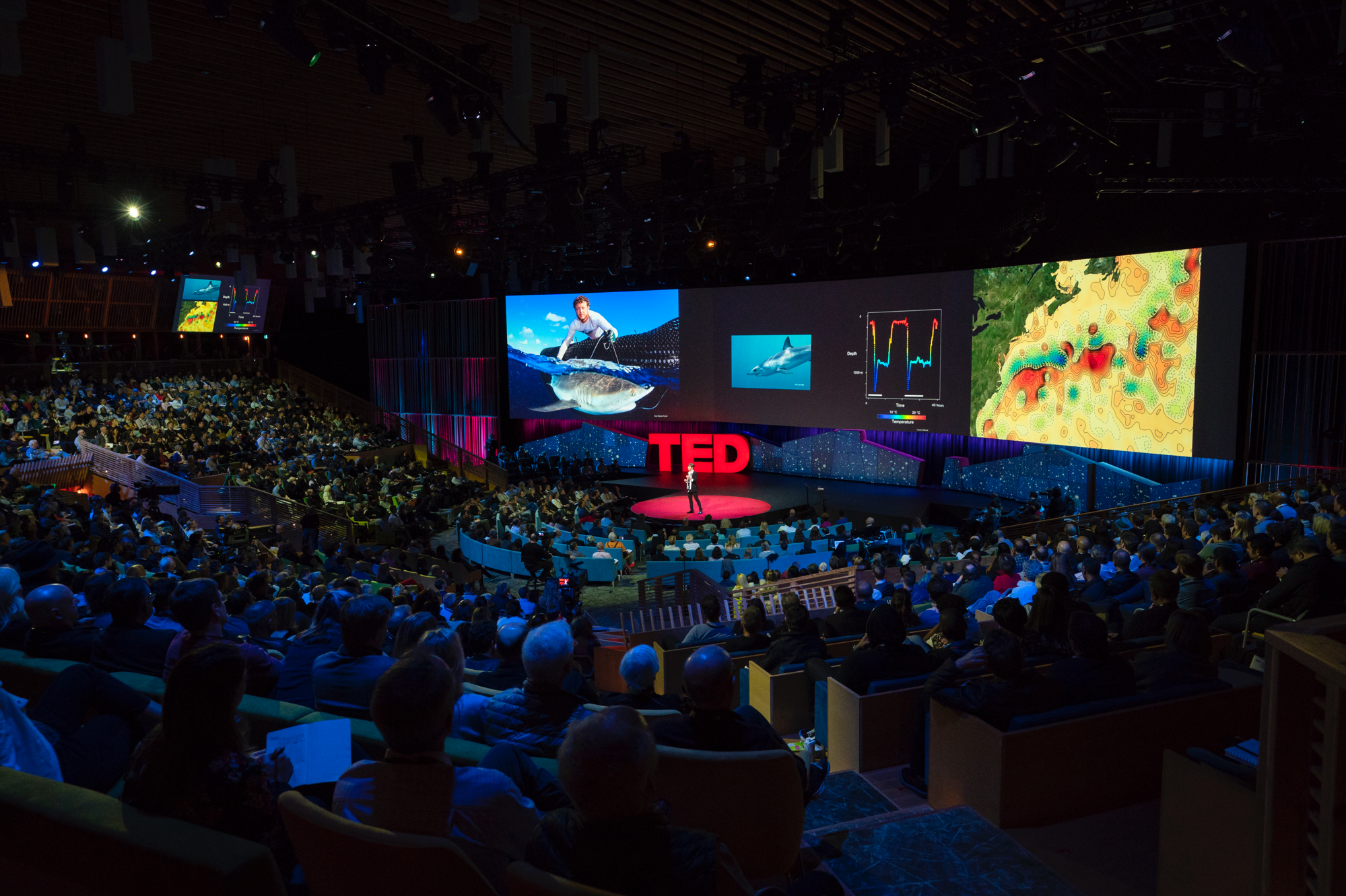 Woods Hole Oceanographic Institution Biologist and Ocean Twilight Zone Project Lead Heidi Sosik speaks at the 2018 TED conference in Vancouver. There have been over 1.2 million views of her talk in the past year. Photo by Jason Redmond, TED.

Craig McCaw of The Craig and Susan McCaw Foundation hopes the project will profoundly increase the quality of research on the role of the twilight zone.

“It appears that it is probable the twilight zone is vastly more important to the health of our planet than anyone previously realized,” McCaw said. “WHOI’s OTZ project has the potential to provide critical knowledge to policymakers, in the hope they will prevent a global environmental catastrophe. We believe that WHOI is the organization best qualified to undertake this important work. I wish the team amazing success in this voyage of exploration.”

Filmmaker and ocean explorer James Cameron has a long-standing partnership with WHOI, which he calls “the world’s leading independent organization dedicated to deep-ocean research, exploration, and education.” Cameron calls the ocean twilight zone “one of the last and most important remaining frontiers on Earth,” and says the need for WHOI to take the lead in exploring it has never been more urgent.

“Commercial fisheries are already homing in on the twilight zone’s abundant resources—when we still know so little about them or the food webs they support,” Cameron said. “Those animals also play a key role in moving carbon to the deep ocean. Without them, more carbon dioxide will build up in the atmosphere, warming the planet with potentially disastrous effects.”

Time is of the essence, agrees Tony James, a major supporter of WHOI’s OTZ initiative.

“We need to act now, and act quickly,” James said. “With so much biological abundance, the twilight zone represents a juicy, yet vulnerable, target. Its resources could either help sustain growing human populations—or rapidly disappear from overexploitation. WHOI has the scientific expertise to develop the data that enable policymakers to protect this essential part of the ocean, today and for future generations.”

The Audacious Project’s philanthropic model of research funding will enable scientists to get more information, more quickly—giving all of us a chance to better understand, appreciate, and protect the ocean twilight zone before it’s too late.