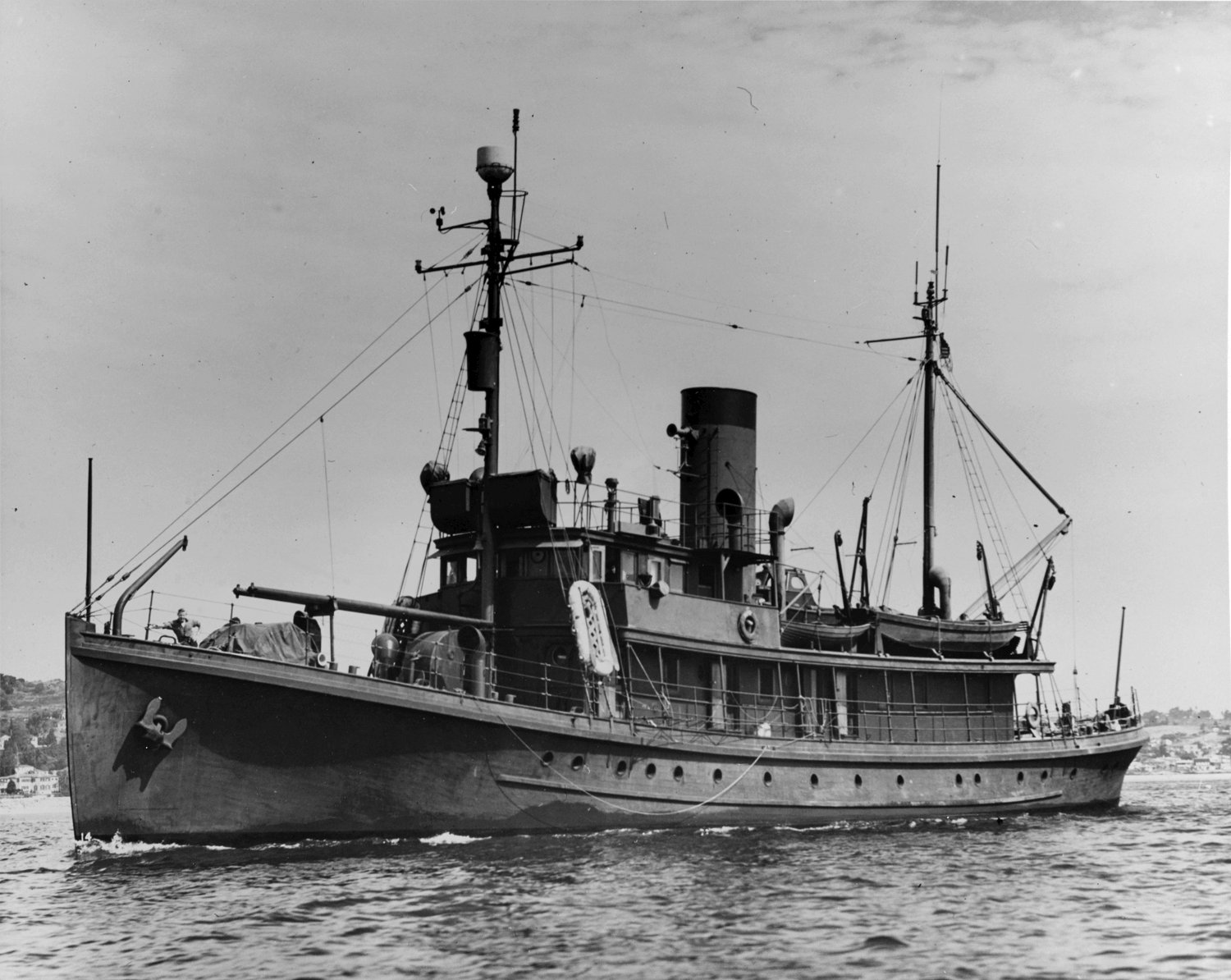 The USS Jasper (PYc-13) as it appeared in 1945—just a few years after scientists discovered the first evidence of the Deep Scattering Layer during a research cruise aboard the ship. (Photo: Naval History and Heritage Command; US Navy Photo NH86368)

On the deck of the USS Jasper, Carl Eyring and his fellow scientists shivered in the morning sun. Even in June, the ocean off the southern California coast ran cold, and the steady winds didn’t help. As the sea around them boiled with whitecaps, throwing spray into their faces, Eyring turned up his collar and went to work.

The researchers aboard the tiny vessel had a big job ahead. It was the summer of 1942, and World War II was already raging throughout much of the globe. German submarines sank American merchant ships with abandon, cutting off valuable supplies to Europe. The U.S. Navy desperately sought a technological advantage.

During their voyage off the coast of San Diego, Eyring and his colleagues, Ralph Christensen and Russell Raitt, were studying a new technology that the Navy hoped could stop the carnage. The basic concept of the device, called “long-range active sonar,” was simple: it sent a pulse of sound into the deep and listened for its resulting echoes. Based on how long those echoes took to return to the ship, the team could potentially find the depth and location of a target. But as the group continued their research over the course of two months, their readings also turned up some surprises. No matter where the Jasper went, a strange signal appeared a few hundred feet below the surface. A thick layer of something was hovering in the deep, dispersing their acoustic signal.

“[This] scattering layer, at a depth of about 300 yards, is the most persistent feature of daylight Observations… made off the California coast,” the team noted in a 1948 paper about their work. Stranger still, the mystery layer didn’t stay put. Over the course of a day, it would quietly vanish, then reappear suddenly in the evening. 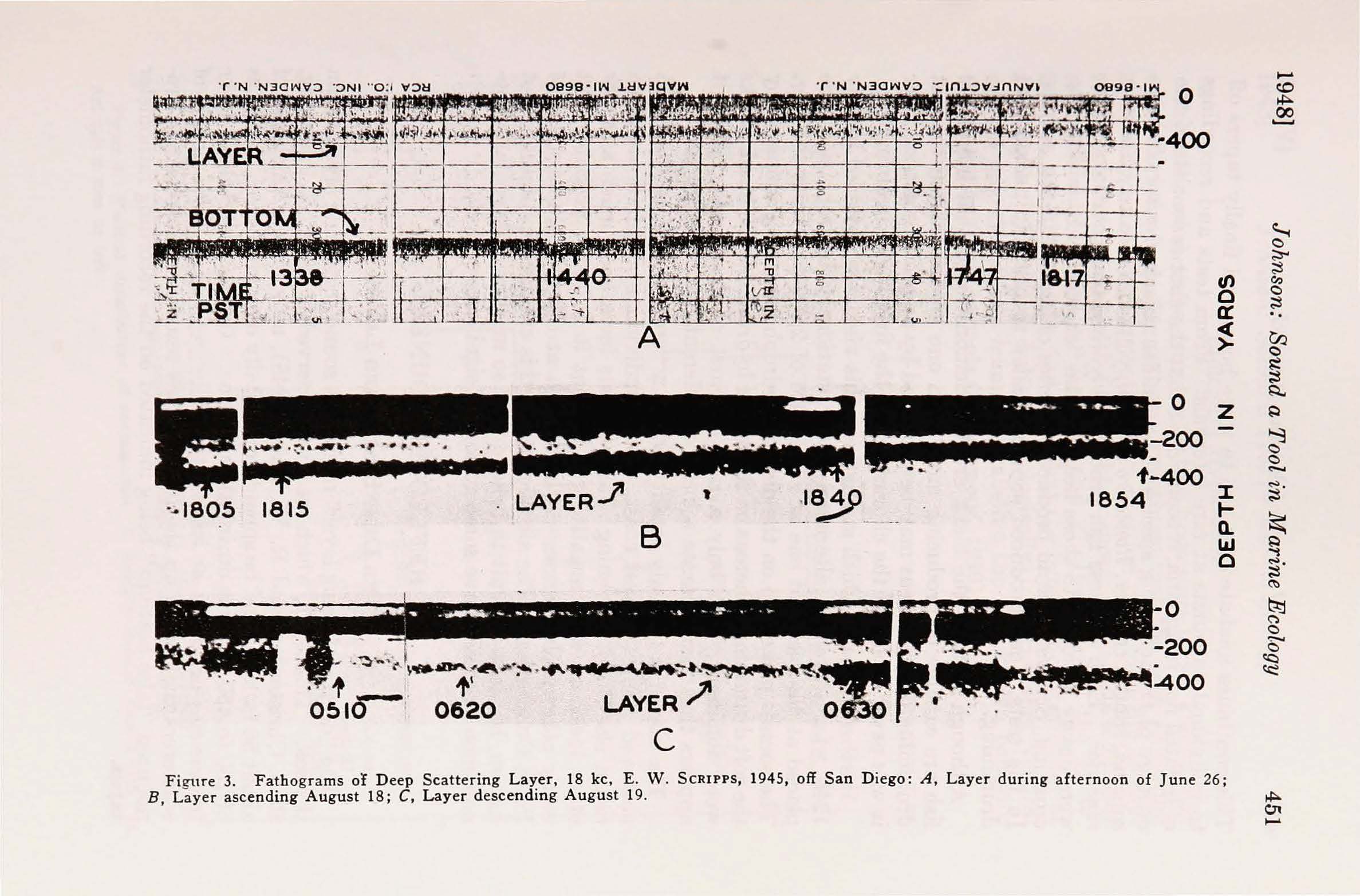 A figure from oceanographer Martin Johnson's 1948 paper, which confirmed that the Deep Scattering Layer (DSL) was actually swarms of marine animals. In the top of the image, sonar instruments have detected both the bottom and the much fainter DSL, which is hovering around 400 yards (356 meters) below the surface.

“They were just mystified that they could go into the same body of water at night and in the morning and get one result from sonar, but suddenly in the afternoon they lost it. They thought it was faulty equipment. It took a few more years to really identify the cause,” says Rear Admiral (Ret) Richard Pittenger, former Oceanographer of the U.S Navy, who later became head of WHOI’s Marine Operations Division.

The discovery of this strange layer offered a tantalizing riddle to the scientists aboard the Jasper—but with a war in full swing, they couldn’t become sidetracked. The team kept their focus on simply measuring its size and weeding out the acoustic interference it caused. Knowing what it actually was had to wait.

In their 1948 paper, the scientists wrote, “little or no effort was expended on the problem of the identification of the scatterers, and this question still remains largely unanswered.” 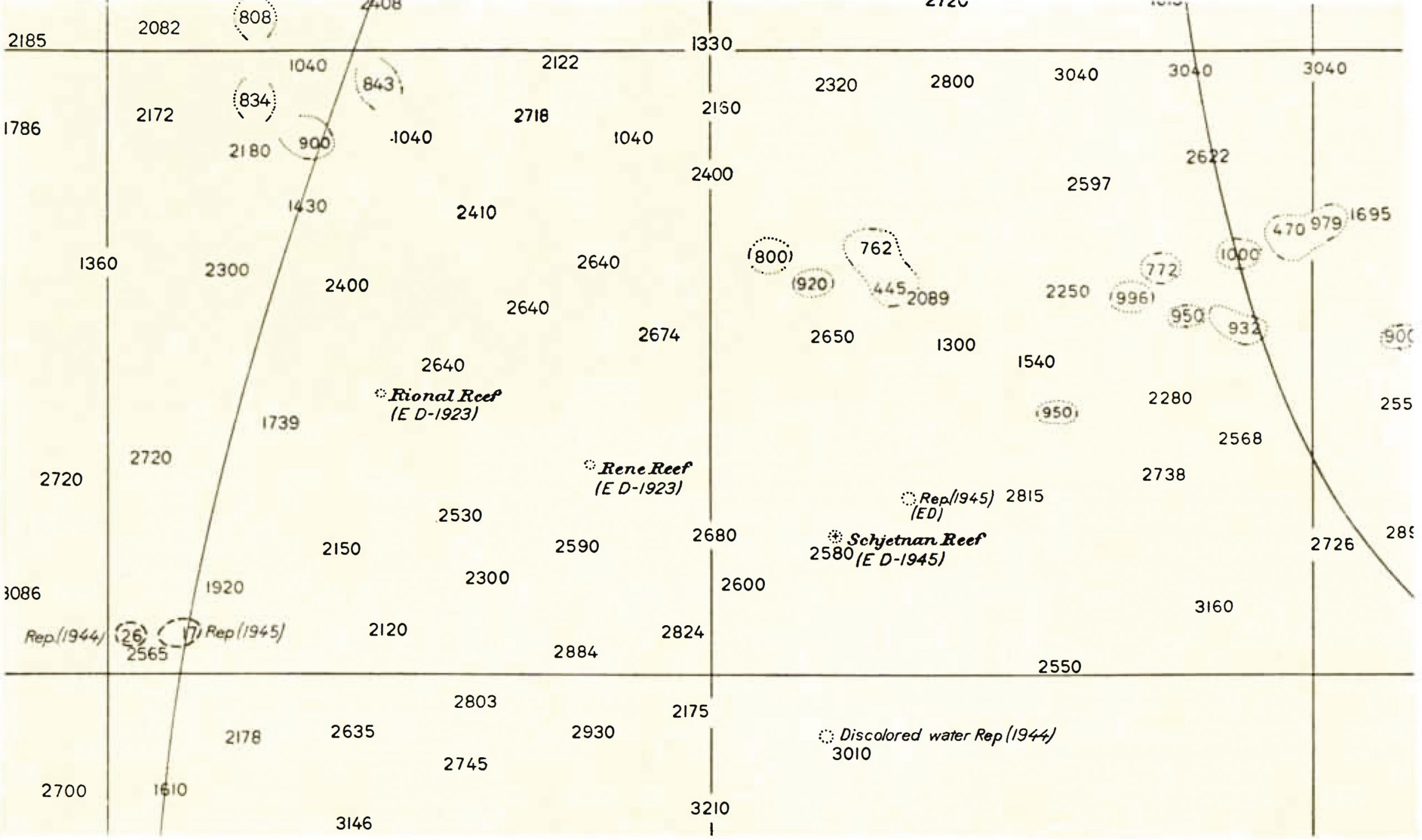 This 1950s-era chart shows a section of the Pacific with four reefs marked "ED" (existence doubtful). Many of these were found by echo sounders, and could represent a "false bottom" caused by the Deep Scattering Layer.

The lack of scientific knowledge about the deep scattering layer quickly revealed itself on nautical charts from the era. When the layer’s sonar-confounding reflections appeared on commercial ships’ acoustic depth finders, crews simply reported the anomaly as a shallow and previously unknown shoal. Hundreds of these tentative readings, some of which remain on charts today, are appended with “ED”, for “existence doubtful.”

Eyring and his contemporaries had a hunch that this “false bottom” was actually made up of huge swarms of marine animals, but it wasn’t until a few years later that Oceanographer Martin Johnson proved them right. During a series of cruises conducted just after the war, Johnson and his fellow scientists at Scripps Institute of Oceanography netted thousands of crustaceans, jellyfish, and other zooplankton at depths that changed as the day progressed—proving that the layer was in fact made of living creatures. 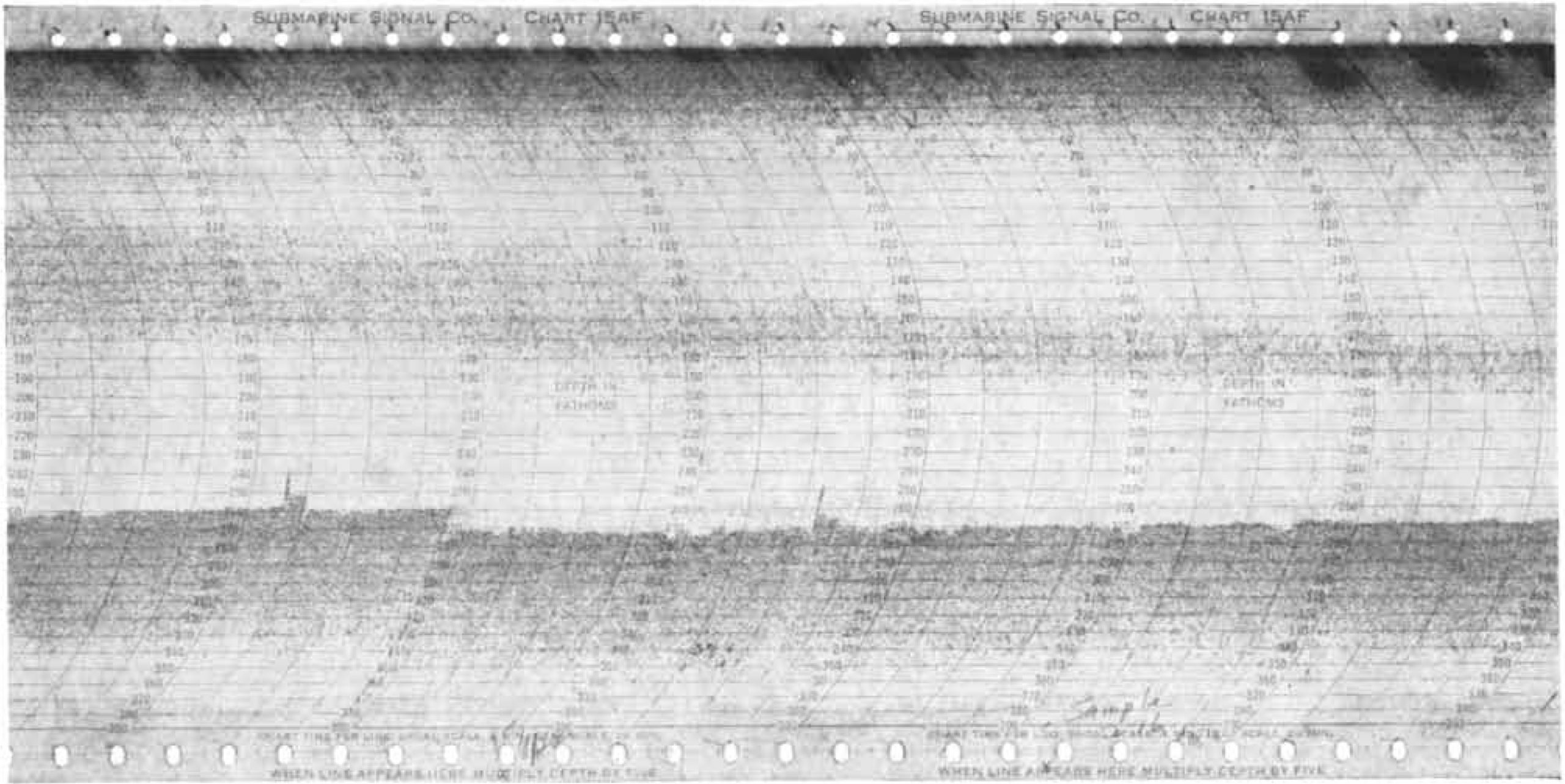 This echo-sounder recording from the 1950s shows the Deep Scattering layer as a faint trace running across the middle of the image. The stronger trace below it is the seafloor.

Since the late 1940s, scientists have progressively chipped away at the mysteries of the deep scattering layer, revealing more and more about its patterns, biology, and importance to the ocean’s vast ecosystem. Improved sonar and other sensing technologies now enable researchers to capture more and more detailed information about the phenomenon—and with every new discovery, a host of new questions emerge.

Today, WHOI’s Ocean Twilight Zone (OTZ) project, which studies the deep region of ocean where the migration begins, is picking up where past generations of researchers left off. Using new acoustic and optical imaging techniques, project scientists have been able to reveal more about the deep scattering layer than ever before possible.

“We’re asking questions that are a lot more targeted,” says Andone Lavery, an acoustical oceanographer at WHOI. “Which organisms are causing scattering at various depths? How many of them are moving? How do they contribute to the movement of carbon throughout the ocean? How does this behavior contribute to animals’ life cycles, and so on? We have a far better understanding of both the deep scattering layer and vertical migration than we did in past decades, but there are still lots of things we need to know.”

Nearly seventy-five years after its discovery, the ocean’s “false bottom” is holding on to a few more secrets.