Andone Lavery got her start studying condensed matter physics—which she admits is an unusual background for an oceanographer. As a principal investigator for the OTZ Project, Lavery specializes in underwater acoustics, a field that uses sound waves to probe the ocean’s waters. Based on the reflections of those waves—and how they scatter when they hit an object—scientists like Lavery can gain amazing insights into remote ecosystems like the ocean twilight zone. In this interview, learn about Lavery’s passion for underwater acoustics, her experience designing new instruments for WHOI, and much more.

What kinds of questions are you trying to answer about the ocean twilight zone?

First and foremost, what is the biomass of organisms in the ocean twilight zone? And what sorts of organisms are down there? Answering those would be a good first step. But not very far behind it will be figuring out these organisms’ and behavior. For example, if you're interested in the connection between the twilight zone and the surface, or if you're interested in how carbon gets transferred from the surface to the deep ocean, you need to know which organisms are migrating back and forth between the two. After that, we’d want to know, what is the distribution of these organisms? Is it completely uniform? Is it incredibly patchy? What are the physical factors that affect their distribution? Does that distribution change with the seasons? Do these organisms migrate out of the region if the water gets too warm or too cold? At this stage, there are always more questions than answers—we just don’t have enough data yet to figure them out.

How are you hoping to gather that much data, especially now that cruises are being postponed due to COVID?

Autonomous sampling could be one way to do that. Over the years, I've developed acoustic sensors for autonomous vehicles that have been used for coastal studies. In the last six months or so, I've been modifying those sensors so that I can put them onto autonomous vehicles that are capable of going down into the ocean twilight zone. That means they have to be rated for deep water, they have to have to operate for a long period of time at that depth, and they have to be mounted on larger vehicles. We're pretty much done with the modifications to an existing autonomous vehicle, which will now have a whole suite of acoustic sensors on it. I'm hoping to be able to deploy that in the next six to eight months, depending on a number of things like the global pandemic. I’m also working on putting some acoustic sensors on scientific moorings we’ll build in the northwest Atlantic. Those will be able to gather data over a long period of time and give us a sense of how certain populations in the twilight zone change with the seasons. 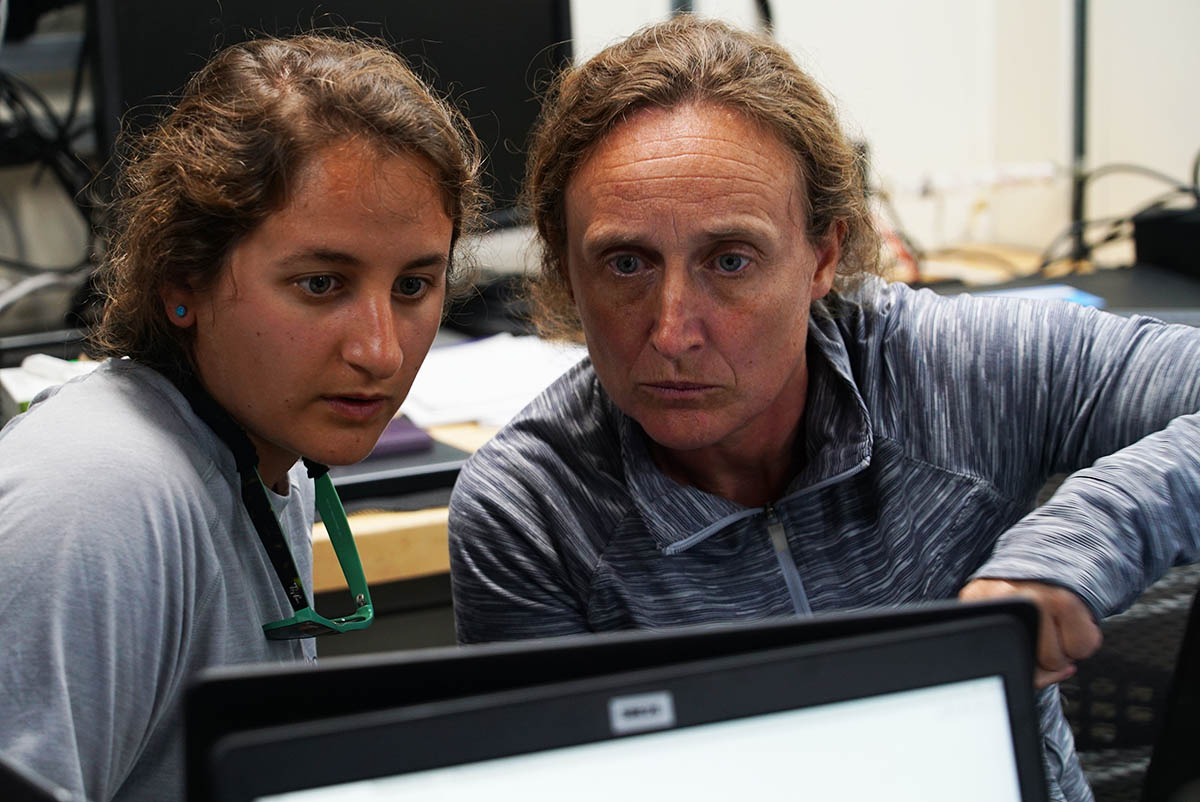 Your main focus is figuring out new ways to use sonar to study the ocean. What are some of the challenges of doing that?

There’s a whole body of literature from people trying to understand how sound scatters around coastal marine organisms. That’s been studied for decades. But sonar is just a survey tool—It’s a way of gathering a lot of data very quickly. The challenge with sonar acoustics really comes when you try to interpret all of that data. Unlike cameras and other visual approaches, sonar doesn’t give you an actual picture of the organisms that you're trying to study. Instead, you have to interpret readings of acoustic pressure that you’ve measured in order to figure out what type of animal you’re detecting, how big it is, and how many of them are present. In order to do that, you have to develop models of how sound waves scatter as they hit these different organisms. I’m not just working to develop acoustic instruments for survey work, but on ways to improve our understanding of how organisms in the twilight zone scatter sound waves when a sonar beam hits them. If we don't figure that out, we can't use acoustics as a tool to study them.

You’ve also helped develop acoustic instruments for WHOI’s Deep-See vehicle. What excites you about that?

One of the things that make Deep-See unique are the acoustic sensors that we've designed. Most sonars installed on fisheries vessels emit extremely high frequency sound—typically more than 20 kHz which is well above the range of human hearing. Deep-See, on the other hand, has some of the only acoustic sensors in the world that work in “mid-frequencies,” between one and 400 kHz. The reason we did that is because when you send a sound wave of that type through an organism that has a swim bladder—as most fish do—that bladder will resonate. Different species will resonate at different frequencies. If you can figure out which frequencies you hear resonating, you can effectively tell which species are down there.

In that sense, Deep-See is acting much like a whale. It's echolocating. It's going down into the water, it's making a sound and then it's listening to the reflections of that sound and trying to characterize what it’s seeing. If it were a whale, it would probably be interested in whether that’s something it would want to eat. Is it a squid? Is it a fish? Does it taste good? In our case, we want to know what species are nearby. But we're basically using the same techniques that an echolocating whale would use. 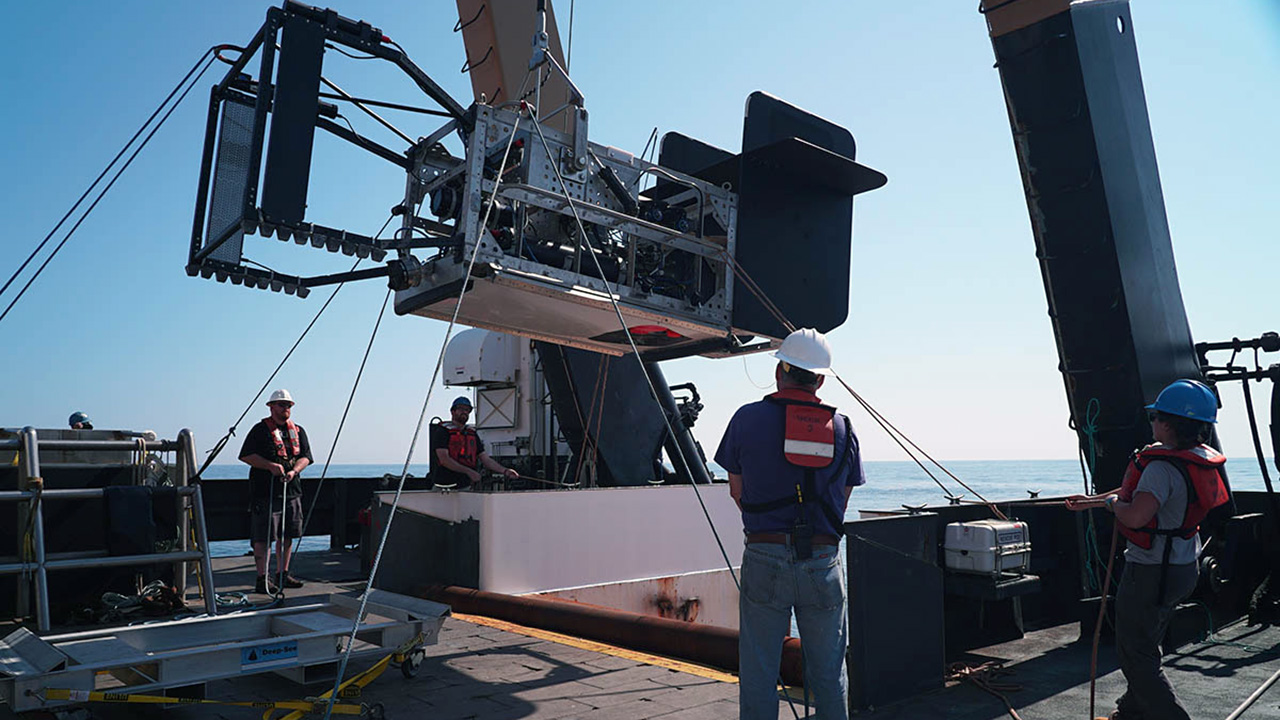 Deep-See heads for its first dive into the twilight zone on its 2019 cruise aboard the NOAA Ship Henry B. Bigelow (Photo by Erik Olsen)

Why do you think it’s so important to study the ocean twilight zone now? What’s at stake?

One of the things that gets me up in the morning is knowing that the twilight zone is on the brink of being commercially exploited. There are fishing companies that have the technology and financial interest to start harvesting life from the twilight zone, but we don't yet understand enough about its ecosystem to be able to do that in a sustainable way. So one of the key questions is, how do we protect this ecosystem before we do what humans always do, and destroy it? And how can we get as much information as possible from our acoustic surveys to inform those decisions?

What are some of the biggest surprises you’ve encountered while studying the ocean twilight zone?

There was one “a-ha” moment on my last cruise that I found equally interesting and disturbing. We often use large trawl nets to sample organisms that live in the twilight zone—and on this particular trip, we caught a strawberry squid that was probably about a meter long. That’s not huge in the grand scheme of things. But this one squid represented more biological material than all the previous trawls from all our previous cruises combined. Granted, most of those trawls pulled up tiny zooplankton, but it drove home the fact that when you're using scientific tools, you're not really studying all of the ocean; you're just looking at a tiny speck of it. It's quite easy to miss large, infrequently seen targets like that huge squid—and yet, those things might account for the majority of the biomass in the twilight zone. The questions you have to ask aren’t just “how much stuff is there” - that's really not specific enough. You need to figure out how it’s distributed. What species make up that biomass? It wasn't until I saw this monstrosity in the net that I started realizing how hard it is to know that for certain. We’d only have to miss three or four of squid like these, and our biomass estimates of the twilight zone would be completely wrong.

You have a background in physics—what first got you interested in studying the oceans?

Yes - in graduate school, I actually studied experimental condensed matter physics, like how oxygen and carbon interact electronically with single crystal surfaces. But I happened to attend a lecture series where one of the speakers was a biological oceanographer named Chuck Greene. He made some fairly strong statements about how the use of sonar could become a very powerful way to study the ocean, but only if more physicists were involved to tackle some larger problems with interpreting all the data. That was pretty interesting to me, so I went to talk to him after the seminar. Next thing I knew, he was inviting me to be on a research cruise in the Gulf of Maine, and I fell in love with it. Even today, I take very much a physics approach to the ocean. I go to sea quite a bit, I develop instruments a lot, do a lot of measurements—but the foundation of my work is really studying the physics of acoustic scattering in the ocean.

Is there a particular scientist who has inspired you throughout your career?

Oh, I’m going to sound like such a nerd. I would say that the first physicist that I really really admired was Maxwell. I was an undergraduate at the University of Cambridge in England, and the site of his lab—which is now a bicycle shed—is still there. He developed Maxwell's equations, which describe electricity and magnetism, in this tiny shed using only longhand notation. I’ve always found that fascinating, just thinking about the mathematical imagination that he must have had. 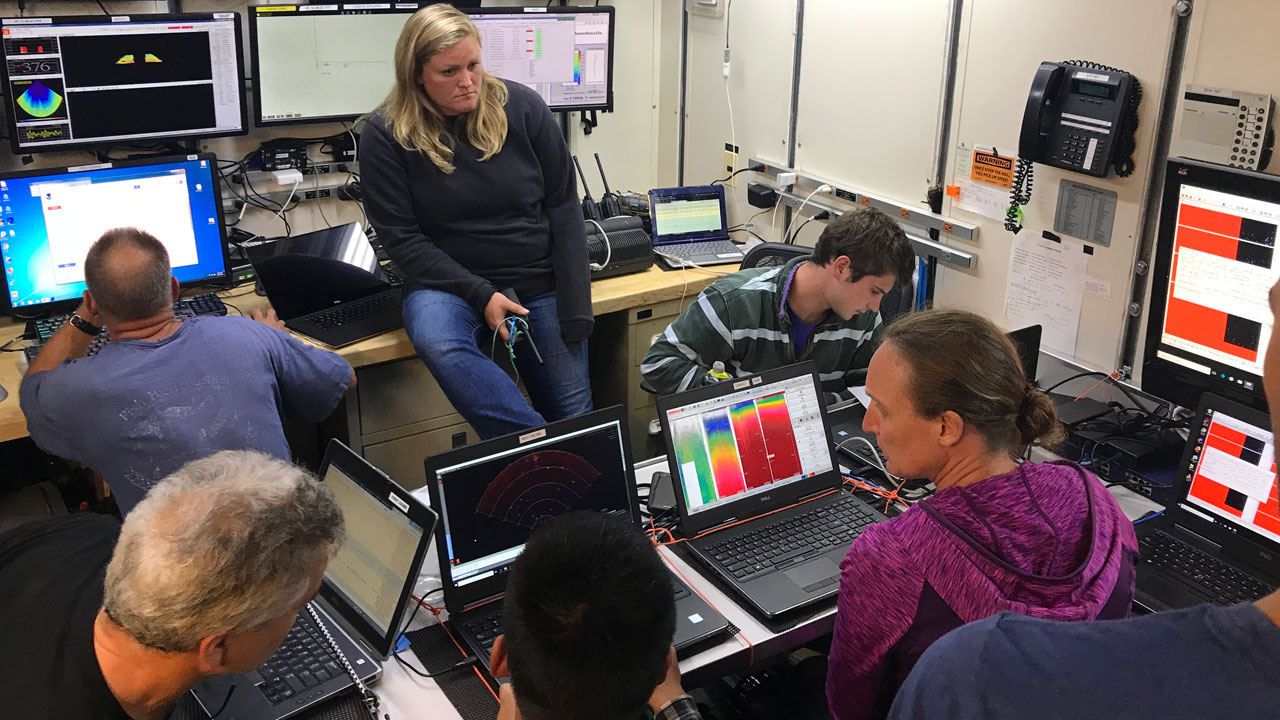