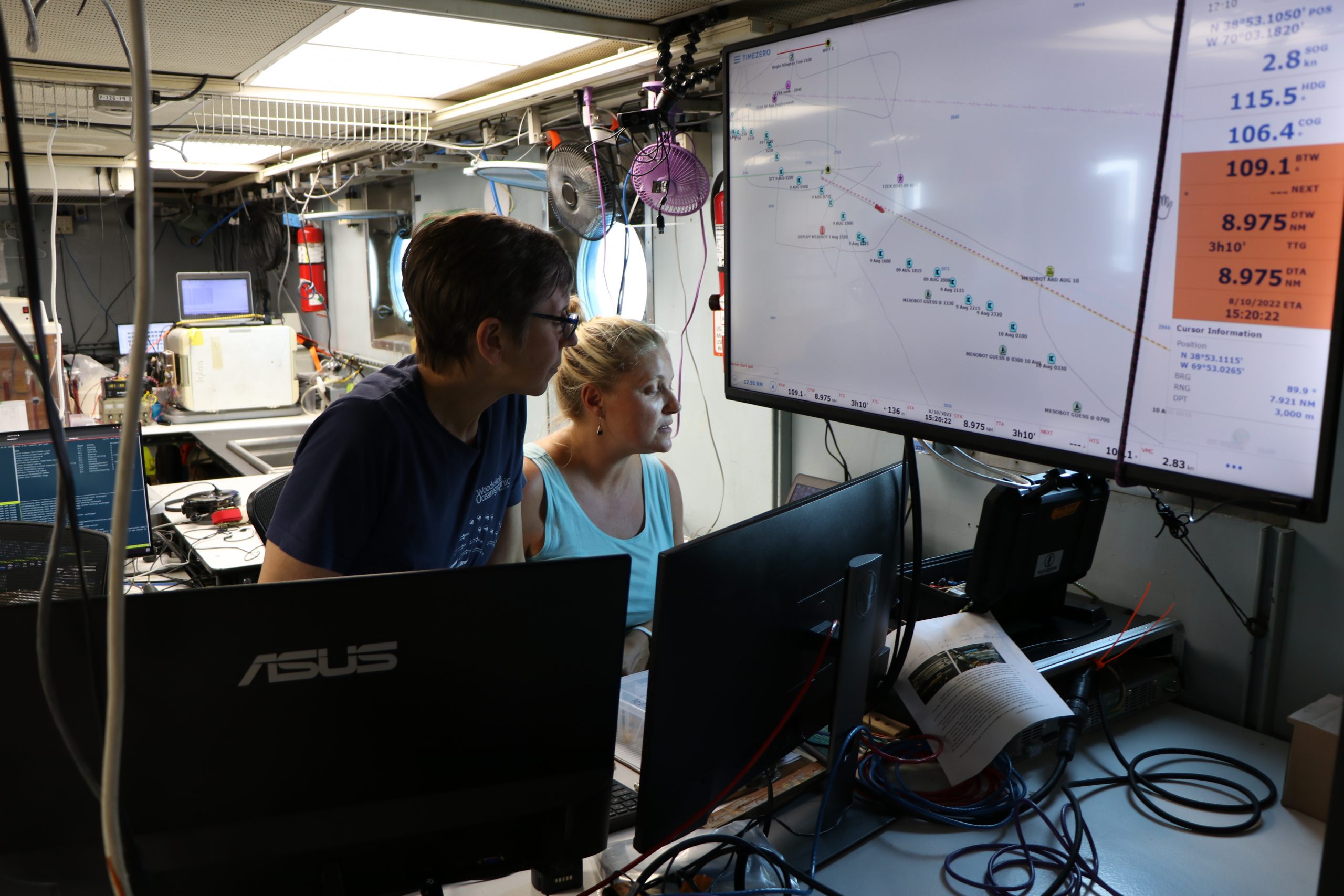 OTZ project lead Heidi Sosik and WHOI senior research assistant Taylor Crockford review data coming in from the towed sled Stingray, which holds multiple sensors and an advanced shadowgraph camera to collect images of gelatinous animals at depth. The monitor above them displays sampling stations and the position of various vehicles, ships, and instruments that are in the water at any given time. (Photo © Woods Hole Oceanographic Institution)

Understanding diel vertical migration—the daily movement of trillions of twilight zone animals to the surface and back again—is not a simple task. No single technology can tell scientists which species are migrating, when they’re traveling, and how they affect the flow of carbon in the ocean. Sonar can provide information about large areas of seawater, but can’t show scientists which individual fish are present, or how they’re behaving. Imaging technology can capture astonishing detail about individual animals, but doesn’t say much about the migration as a whole. Net tows can catch some of the fish  and plankton in a migrating layer—revealing a few species that are present—but will miss any animals that simply swim around the nets.

“Every instrument has its strengths and weaknesses. They don't all cover your scientific questions,” says OTZ researcher Andone Lavery. “Right now, we’re working really hard to try to understand really basic questions, like how many fishes are there in a particular volume of these migrating layers?”

In order to chip away at big questions like those, the OTZ team must deploy several different instruments at the same time. Each of these devices complements the others, and lets the team gather multiple perspectives on the same migration—from tiny carbon-rich particles, to photos and videos, sonar-based imaging, and even physical samples of the species in each migrating layer.

By 7pm, the multibeam sonar (at the same frequency) shows the signs of vertical migration. The green bands are located at much closer to the surface, just as the sun is about to set. (Photo by Joel Llopiz © Woods Hole Oceanographic Institution)

First, scientists identify the exact place and depth they want to sample. Using data from ship-based sonar, the team can see when large masses of migrating animals are present, with swarms of organisms appearing as red, green, blue, and yellow bands on the computer monitors in the ship's lab. In this case, the team found two promising layers (in green), between 490-570 meters (bottom) and 350-400 meters (top). This data can only provide scientists with high-level info on the migration, however—it doesn’t show the specific species present, or how those species behave while they’re moving towards the surface. 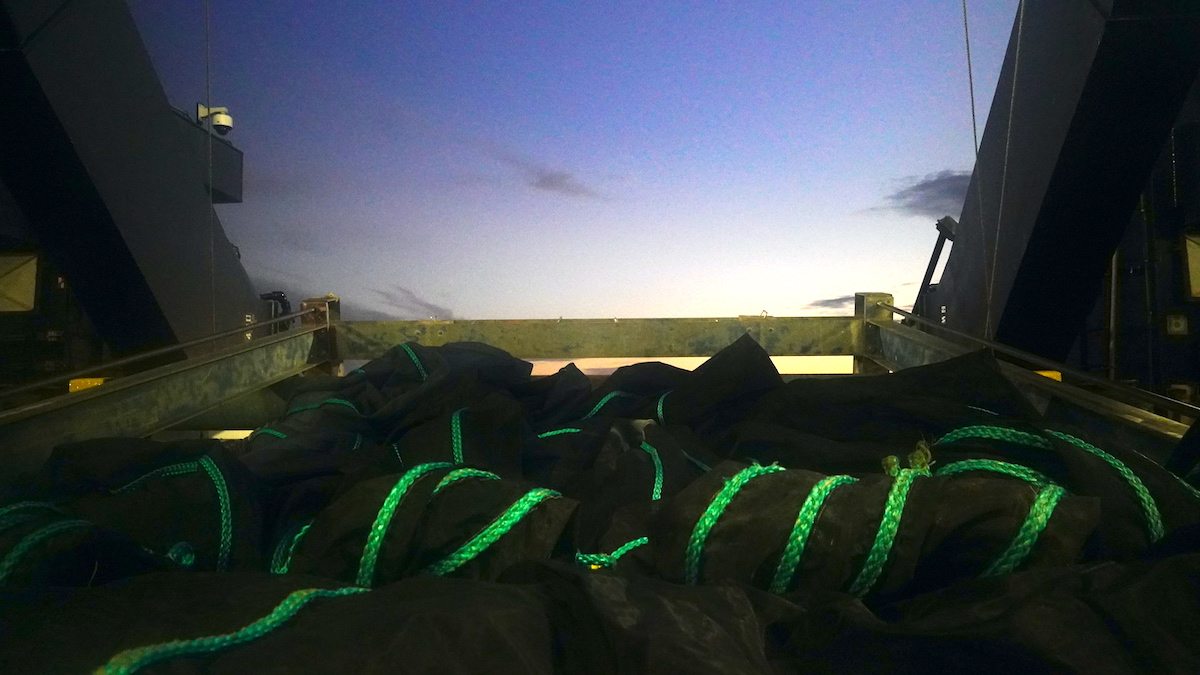 The MOCNESS awaits deployment. This high-tech tow net allows researchers to match what is found in nets at specific intervals with discrete properties of water at those depths. (Photo by Andrea Vale © Woods Hole Oceanographic Institution)

Using the sonar readings as a kind of road map, WHOI fish ecologist Joel Llopiz decided to send out the MOCNESS nets to sample the two layers. By sunset, the migration had traveled upward from roughly 550 meters to 250 meters. 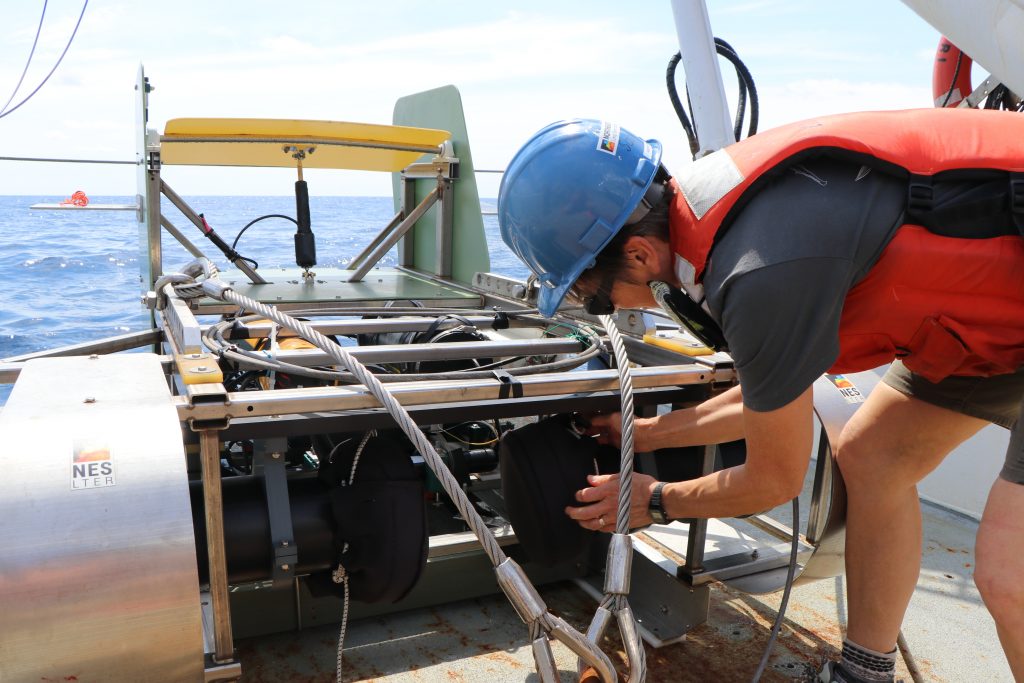 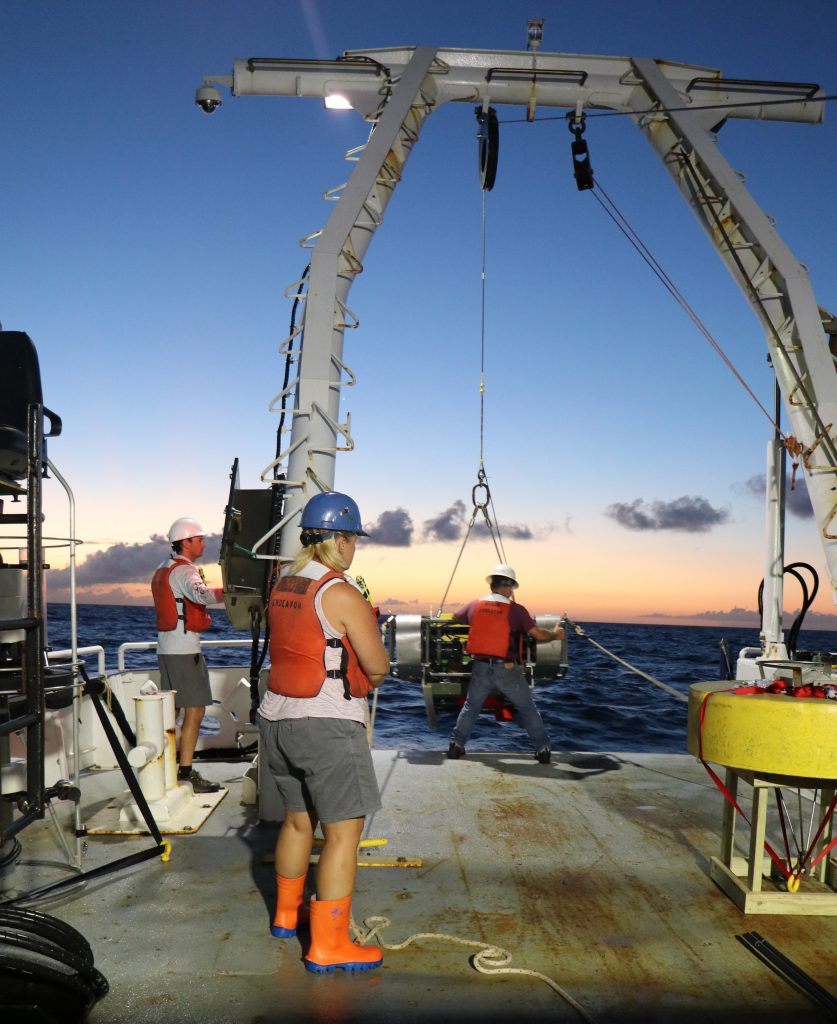 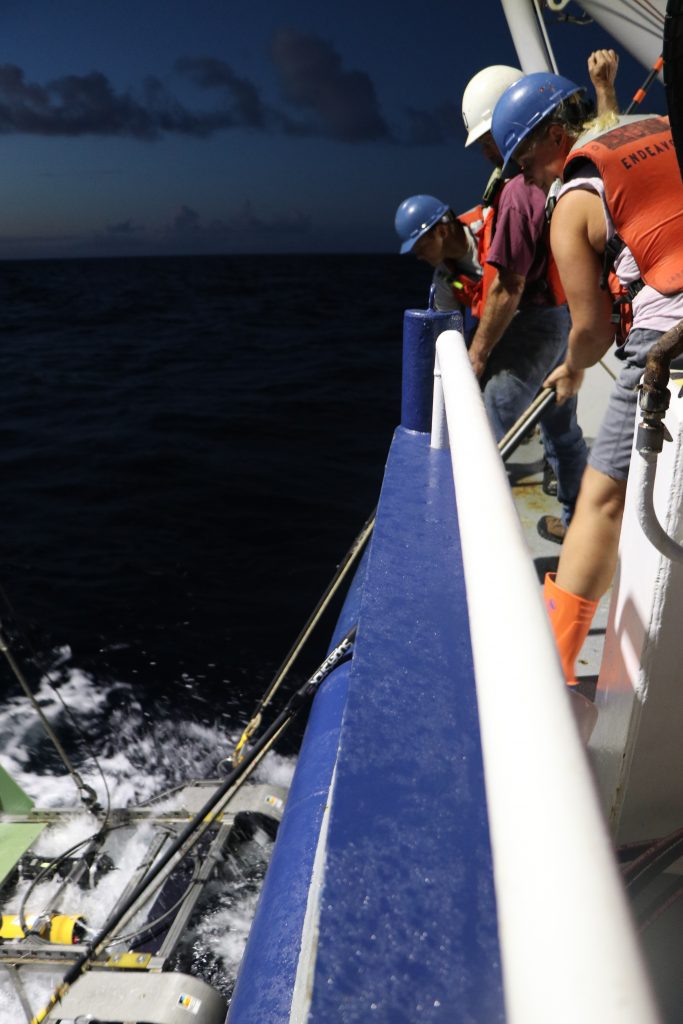 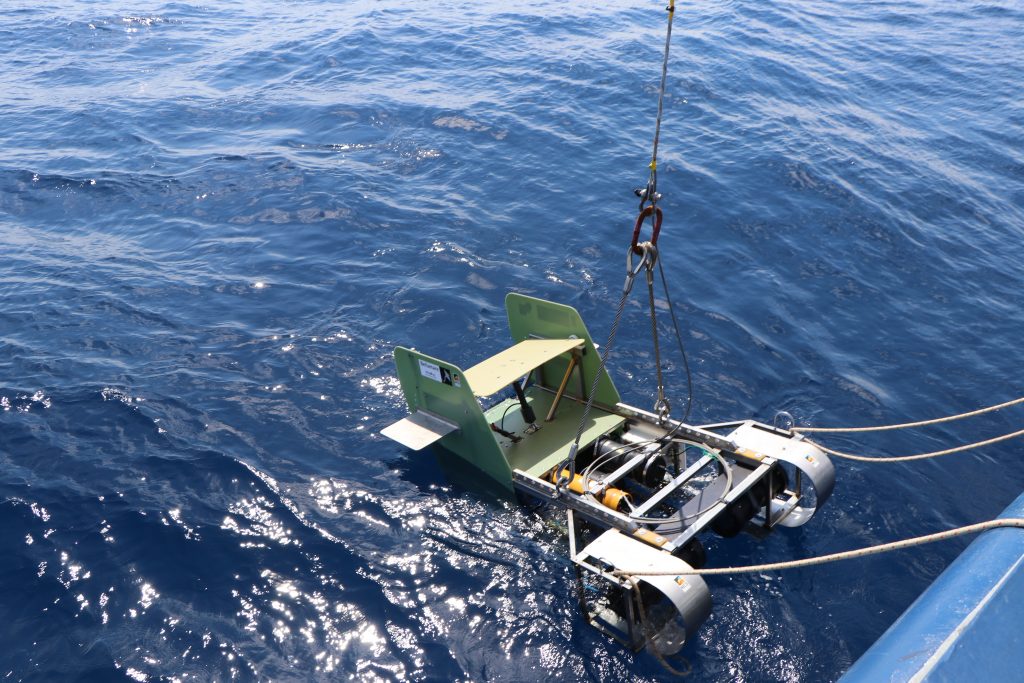 Stingray prepares for a deep dive. Scientists tow the sensor-laden sled behind the ship in a zig-zag pattern, or sometimes "park" it at a specific depth. (Photo by Taylor Crockford © Woods Hole Oceanographic Institution)

As night fell, the MOCNESS nets skimmed the twin layers of zooplankton and small fish; researchers parked the Stingray imaging sled at 250 meters to “watch” the migration as it passed by. The team continued to “tow-yo” Stingray (pulling it up and down through the water during its tow), slowly moving between the surface and 300 meters as it collected images of plankton and other small organisms. Finally, just before dawn, the Stingray took a rest at 250 meters to watch these tiny organisms move back to the twilight zone as the sun rose over the surface.

After MOCNESS and Stingray gathered data in near-surface layers, Deep-See went overboard at 2am to do a 19-hour exploration. Using onboard multibeam sonar, the vehicle could descend into the layers, recording close-up acoustic data with far higher resolution than would be possible from aboard the ship. Using this data, the team hopes to improve the accuracy of ship-based sonar interpretation, making it a more useful tool for studying the twilight zone.

In the morning, the team gathered even more data on the slowly-moving layers, sending the TZEX robot on a 28-hour mission to collect marine snow (particles of fish poop, half-eaten food, and dead plankton) that the organisms left behind during their feeding frenzy, providing data on the amount of carbon sinking from the migrating layer. At the same time, Mesobot cruised autonomously in deep water, providing scientists with information on how specific species behave as they migrate. 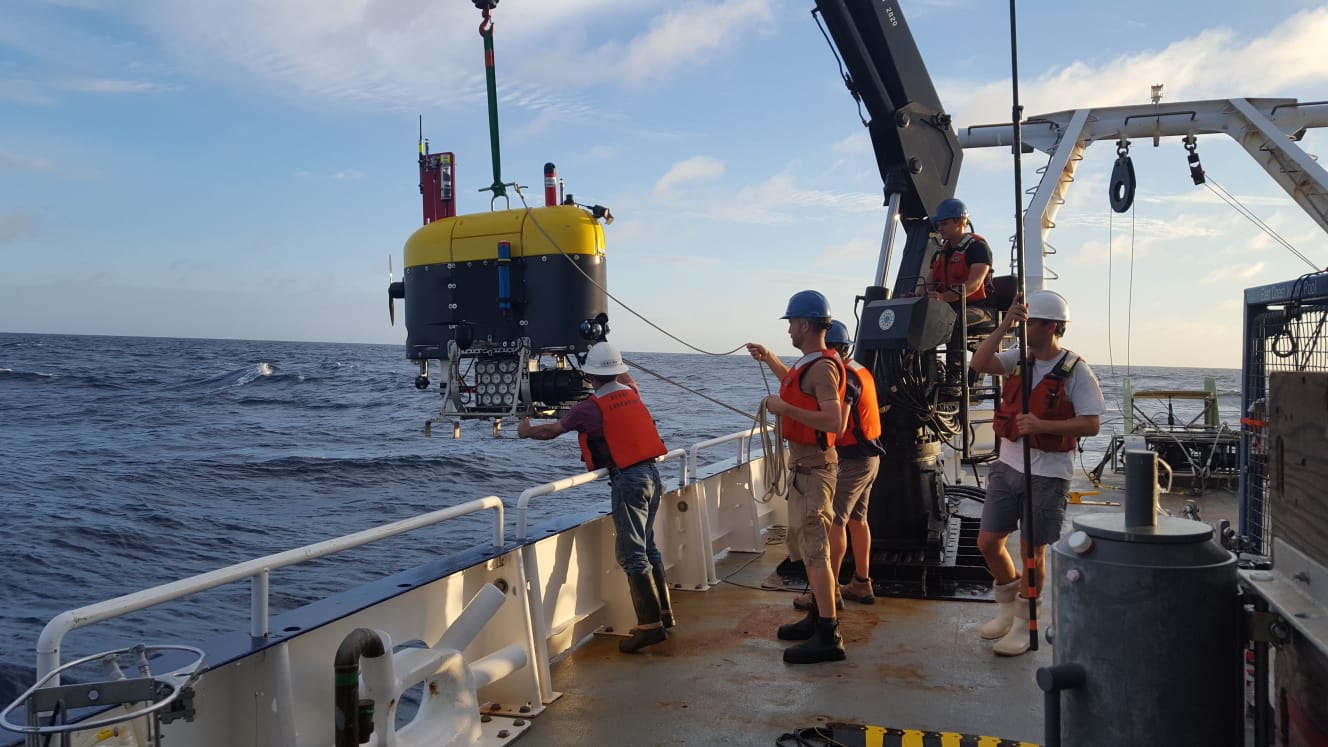 Mesobot is lowered over the side of the R/V Endeavor. This powerful imaging robot captures video of gelatinous animals as well as eDNA samples from the water column. (Photo © Woods Hole Oceanographic Institution)

Deploying these instruments simultaneously is a huge challenge, however. Many are sent over the ship's side or stern on thousands of feet of steel cable. Crossing those cables, or hitting autonomous robotic instruments already in the water (like Mesobot or TZEX), would be catastrophic for the mission, so each ship, its crew members, and its scientist must stay in sync at all times. To do this, the team took advantage of the limited satellite WiFi connection on both ships, using an off-the-shelf smartphone app to send text messages and photos back and forth to all people onboard instantly. This quick means of communication, combined with radio contact between the ships’ captains, kept everyone aboard on the same page.