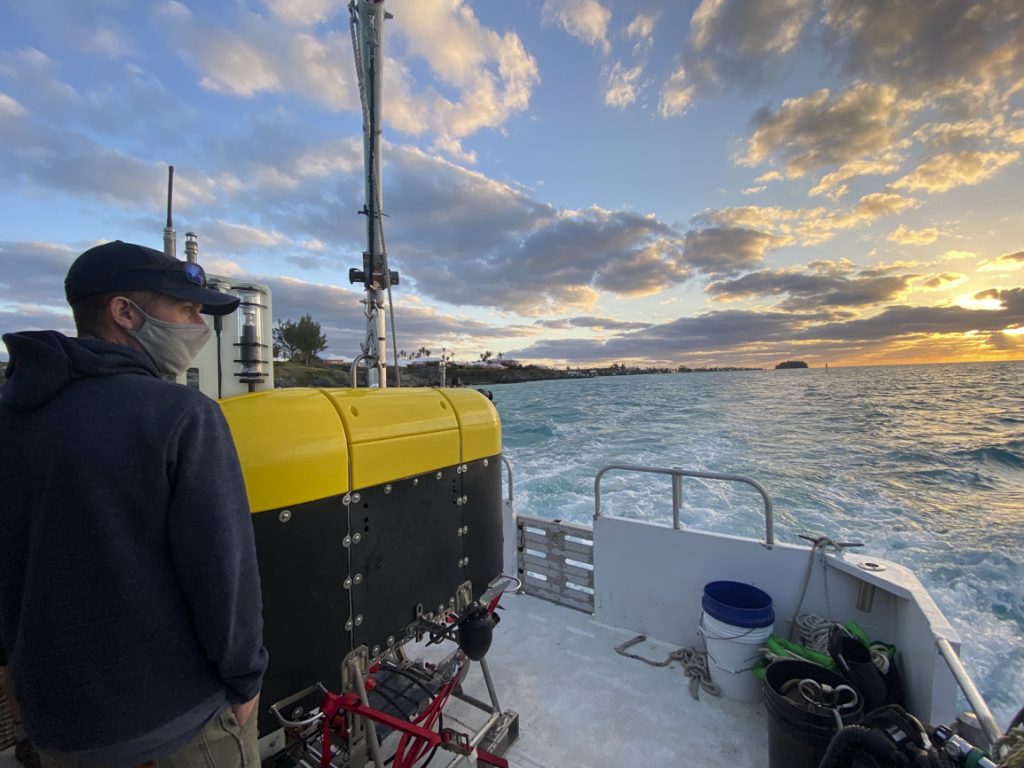 It's official: Mesobot dipped into the open waters off Bermuda for the first time, kicking off a month of shore-based testing. Since the waters of the ocean twilight zone are reachable within a short sail of Bermuda's coast, the R/V Catapult (the 35-foot catamaran the team is using as a test platform), will be able to test Mesobot in deep waters, return to shore, and swap the vehicle for Twilight Zone Explorer (TZEx), another instrument developed by the OTZ team.

The team's deep-water dives began with a series of tests. The first was a daytime dive to about 700 meters to see if Mesobot and its radiometer could work together to collect light measurements down to twilight zone depths. Indeed, the data gathered showed decreasing light levels as Mesobot dove deeper, indicating the radiometer was accurately detecting fewer photons as light was filtered through an increasingly thick ceiling of seawater.

The second dive was to test Mesobot’s cameras. Since these cameras require artificial light to capture images—which pollutes the radiometer’s ambient light data—the OTZ Team ignored data from the radiometer, which they knew would be tainted. After the dive, when Mesobot popped back up to the surface, the team checked the data, and verified that the cameras worked! That meant it was time for some science.

With the cameras and the radiometer playing nicely together, it was finally time to use them on a more exploratory mission. After a good night’s sleep on shore, the OTZ Team returned to Catapult, and headed out about an hour off the coast to deep water. This time, Mesobot was to dive to the deep scattering layer—a thick layer of life that loiters in the twilight zone by day—to gather images and light readings along its journey. WHOI Senior Scientist Dana Yoerger and Engineer Jordan Stanway programmed Mesobot to alternate between turning the lights on and off so the two systems could operate in tandem. 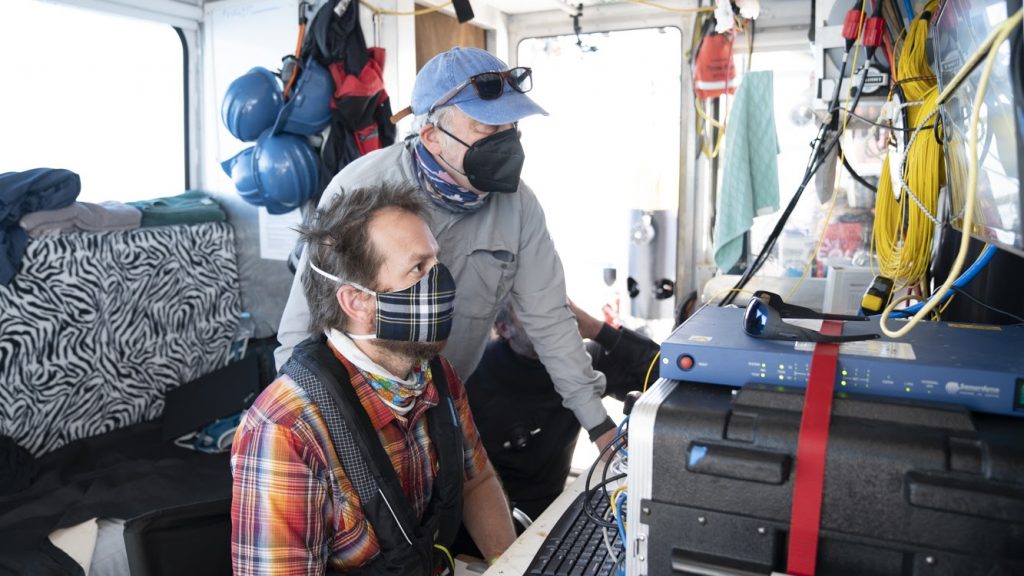 WHOI Senior Scientist Dana Yoerger (right) and Engineer Jordan Stanway (left) review Mesobot's dive plan before its first deep-water deployment. Instructions to the vehicle can be pre-programmed before sending it on its way. Credit: Jennifer Berglund

Mesobot is what is known as a hybrid ROV/AUV.  As an AUV, or Autonomous Underwater Vehicle, it can be pre-programmed to operate on its own.  It can also be operated as an ROV, or Remotely Operated Vehicle, connected by tether to controls on the boat, and guided in real time by a pilot. Having the flexibility to alternate between the two modes gives it a great deal of versatility in doing science.

As an ROV, a pilot can respond to the vehicle’s environment in real time—say, collect a sample at an interesting site—but tethered to the boat, it can never go too far. In AUV mode, as with these dives, it is unattached from the boat. This allows Mesobot to travel further away, but because it’s on its own, the entire dive must be pre-programmed. That means it can’t really respond to something unexpected in real time.

Dana and Jordan programmed Mesobot to complete a long set of tasks during this AUV dive—go down to this depth, alternate between lights on and radiometer readings here, come up at a certain speed at a particular time, etc—all written in a programming language understood by Mesobot.

Once deployed, the team kept track of Mesobot using two different sonar systems, each with their own readout screen.  One sonar, the less sensitive of the two, was mostly used by Captain David Ullman to keep track of Mesobot below, and steer the boat so Mesobot stayed in range of the other, more sensitive sonar.  That second sonar was used by the scientists to gauge Mesobot’s depth in relation to the deep scattering layer.

Sonar works by emitting sound waves, which bounce off objects, and back to a receiver.  The returned signals are used to paint a picture of the environment below.  In this case, the less sensitive sonar David used emitted longer wavelengths, which bounced off larger objects like Mesobot, giving him a clear signal to follow.  The more sensitive sonar used by the scientists, emitted shorter, more sensitive wavelengths that bounced off small pockets of air found in some fish and gelatinous animals like siphonophores.

Research Technician Fredrick Marin uses a pole to hook Mesobot to Catapult’s winch, which will lift it onto the deck. Credit: Jennifer Berglund

The first mission to record data in the deep scattering layer lasted for a few hours, and based on what the team saw from the surface, it was perfectly executed. Mesobot, as expected, ventured into the deep scattering layer, motored through it for a bit, and then returned to the surface.  Once surfaced, Captain David Ullman steered the boat close enough to it so Research Technician Fredrick Marin could reach out with a long pole to attach a hook and rope connected to the boat’s winch, which lifted Mesobot back onto the stern deck. With the vehicle onboard, Catapult ferried the team home on perfectly azure seas decorated by a spectacular sunset.

Back at Station B, however, the team took a peak at Mesobot’s data, and found another problem with the camera. Alas, the team would have to wait for another day and another dive to break out the popcorn for a movie night featuring twilight zone creatures.

Stay tuned for more adventures into the twilight zone...