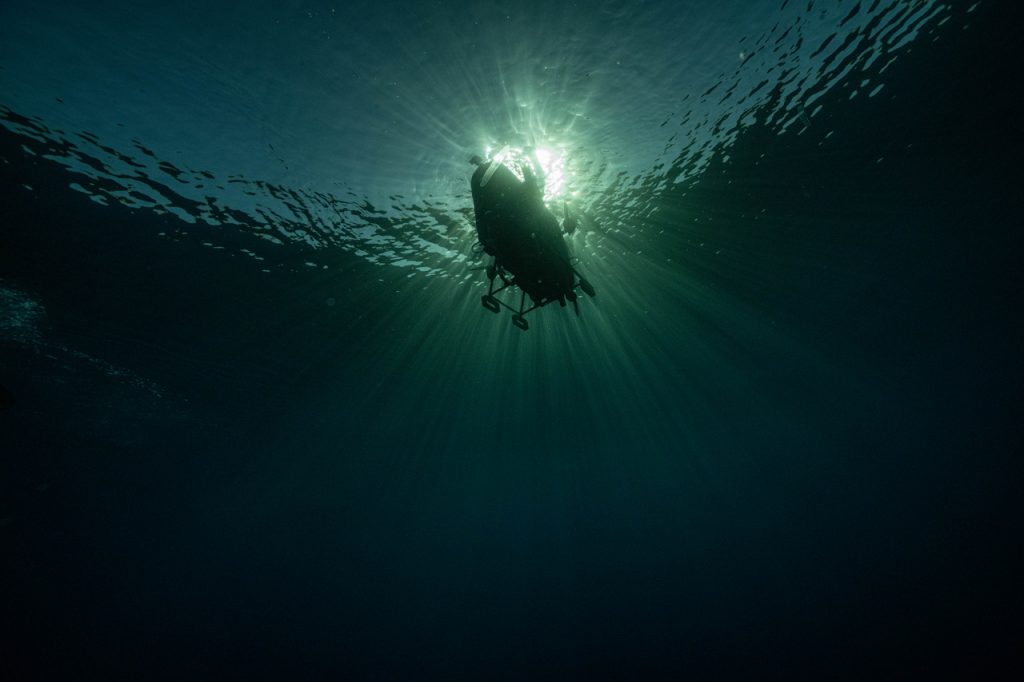 Sunlight filters through the seawater above as As Mesobot descends to the twilight zone. Credit: Evan Kovacs

Now that Mesobot has been fully tested on land and in shallow water, it's finally time to venture into the deep. The first dive began with a simple test designed to answer a fundamental question governing life in the twilight zone — just how much sunlight makes it down into the deep?

The ocean, after all, is the ultimate light filter. As you dive progressively deeper, the colors of the surface fade away, leaving behind little more than a spectral blue glow.  Sunlight, or white light, is actually a mixture of multiple colors of different wavelengths, which, arranged in order from long to short, make up the colors of the rainbow—red, orange, yellow, green, blue, and violet.  When light passes through water, however, it is gradually absorbed, starting with the ends of the rainbow — red and violet — with blue surviving the longest.  Eventually though, even the blue disappears as you sink below the twilight zone and enter the abyss.

While scientists understand the general principles that determine how light is filtered through seawater, the behavior of light in different environments varies tremendously. On a stormy day, for instance, or after a massive phytoplankton bloom at the surface, light doesn’t penetrate as far as it would through perfectly clear water. OTZ Scientists suspect the slightest changes in light influence the behavior of twilight zone life—even a cloud covering the Sun may trigger the masses to move up and down the water column.  If we are to understand why twilight zone life behaves the way it does, we must measure light, and do so with incredible precision.

Fortunately, the team has just the tool. MIT/WHOI Oceanographer Allan Adams and MIT Future Ocean Lab Postdoc Jacob Bernstein, designed and built what may be the most sensitive mesopelagic radiometer ever made. This radiometer, an instrument for measuring light, is capable of detecting individual photons, or particles of light, with nanosecond precision. OTZ scientists need this kind of sensitivity in order to understand both the physical properties of light in the twilight zone environment, and how it influences the behavior of the animals that live there. Connected to Mesobot, it becomes just one more scientific tool in the AUVs arsenal for uncovering the secrets of the mysterious ocean twilight zone environment.